In Oregon City, Oregon, a drug raid was taking place that ended up being a bit more than expected for law enforcement.  Along with a large quantity of drugs, a puppy mill operation was also shut down, and some poor unfortunate dogs and puppies were rescued from a life of misery and squalor.

There were many different breeds of dog on the premises when the Clackamas County Inter-Agency Task Force raided the address early Wednesday morning.  Over a dozen very young pups were taken away, along with Labrador retrievers, German shepherds, Chihuahuas and Cocker spaniels.

There were dead rats found in the dog’s drinking water, and urine and feces all over.  Many of the officers have said that it’s up there with some of the worst things they’ve ever seen.  All of the animals rescued have been taken away for medical evaluations, and the investigation into the actions of the individuals in question is ongoing. 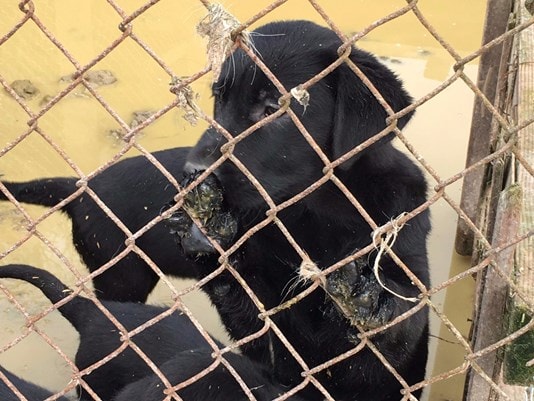 “It’s appalling,” said Sharon Harmon of the Oregon Humane Society.  “When you consider how we care for our animals, and we think our dogs should be sleeping in the house if not sleeping in the beds with us, and here these dogs are living in a sea of feces and urine.”

Police found materials that were being used to bilk people out of money on the dogs as well.  As many people know, pure-breed and designer dogs are insanely expensive, and the materials taken said that the “kennel” they operated was “AKC certified.”  Many claims to the dogs being from “champion bloodlines,” and that the pups were coming from real homes where they were lovingly cared for until they were bought.