Four people and a dog were rescued from a boat explosion that took place off the coast of Georgia, near St. Simmons Island.  The U.S. Coast Guard is reporting that there were injuries, but no one was killed, thankfully.

The boat called Predator, was a 58-foot fishing vessel.  It somehow caught fire, which quickly spread throughout the boat, and eventually causing it to explode.  According to reports, a call came in at about 4am, saying that the boat caught fire and the crew was abandoning ship. 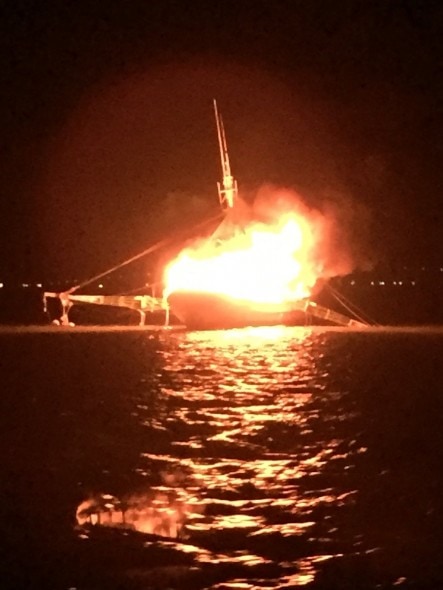 Frank Owens, owner of City Market Seafood identified the owners of the boat as Robert and Charles Long.  They supply Owens with products to sell at his retail locations.  The Longs were aboard with two other crewmen, and their dog Chopper often went out with them to work.

According to Owens, the crew saw smoke coming out of the pilot house in the very early morning hours.  They weren’t taking any chances, so they radioed that they’d be jumping ship ASAP, however, the boat blew up before they could get far enough away.  Again, there were injuries, but no one was killed, and everyone, even Chopper, is expected to make a full recovery.

The crew wasn’t too sure how long they were in the water before they were rescued, but the official reports from the Coast Guard state time of rescue at about 4:30am.  It’s believed that there was a wiring problem somewhere on the boat, probably near the generator.  The full cause of the explosion is still under investigation.