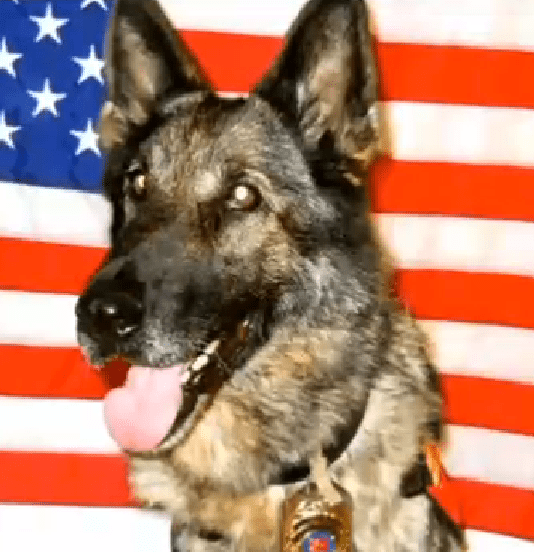 Sgt. Beyco has a huge impact on many lives, which was apparent as more than 150 people attended the bomb-sniffing German shepherd’s memorial service on Sunday in Louisville, Kentucky.

Beyco served as a bomb-sniffing dog with the Marines in Fallujah during the Iraq war, serving two tours. She helped find 6 armed insurgents, including one with a suicide vest. She also served stateside working with the secret service and helping to handle domestic bomb threats. She retired from the U.S Marine Corps in November of 2011.

Once she retired from the Marines she became a member of the Kentucky Patriot Guard and spent her time consoling families that had lost loved ones as an honor service dog. Her last job had been attending the funeral service for a fallen police officer.

Beyco passed away on June 18th after Joe Strum, her handler, took her to the vet and it was discovered she was suffering from cancer.

Her memorial service on Sunday included a motorcycle motorcade, a 21-gun salute and a room of emotional veterans and friends of Beyco.

“Not only was she a Marine but she was patriot guard member and friend,” said a tearful Larry Eckhardt. “For those who didn’t know Beyco, you really missed out. She was a fine lady.”

For Strum holding back his emotions was tough as he said good bye to his dear friend.

“You know I’m just so proud of her…I don’t want to get emotional,” said Strum. “I can’t tell you how overwhelmed and honored I am for her. I’m so proud of her.”