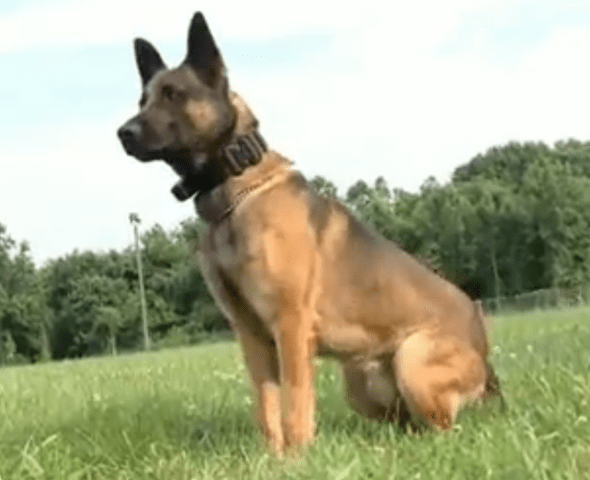 Corporal Scott Allen with the Prince George’s County Police Department is thanking his partner Rambo for saving his life.

Last Sunday Rambo and Allen were responding to a call about a man who had barricaded inside a home. The man was likely high on PCP. After a nine-hour standoff the man jumped out a window and took off with a gun in his hand. As the dangerous man took off down the street Allen gave Rambo a bite command and the police dog took off.

“Here was a deranged suspect, armed with a handgun, running through a residential neighborhood,” said Allen. “So I gave Rambo the bite command and he ran down the street and bit the suspect in the right arm, which was the arm in which he had the gun in. At that time, I didn’t have time to think about what truly happened, and I do feel that he saved my life that day.”

With Rambo’s efforts the suspect, 31-year old Othman Conteh, was taken into custody with only minor injuries.

In the past two years Rambo’s record has been impressive. He has taken only seven suspects by biting them. He has apprehended another 46 suspects without having to bite them.

The relationship between Rambo and Allen is very close, as Allen spends more time with Rambo than with his family. Allen makes sure Rambo gets a proper reward when he does a good job.

“When he performs well and does a good job, he gets a 7 ounce filet mignon,” said Allen.