In a Brazil, a terrified dog was trapped in shallow canal. The flowing water had a fast current and the dog sought refuge a top accumulated garbage in the middle of the canal. Thanks to concerned neighbors who spotted the distressed dog, the pet was rescued. 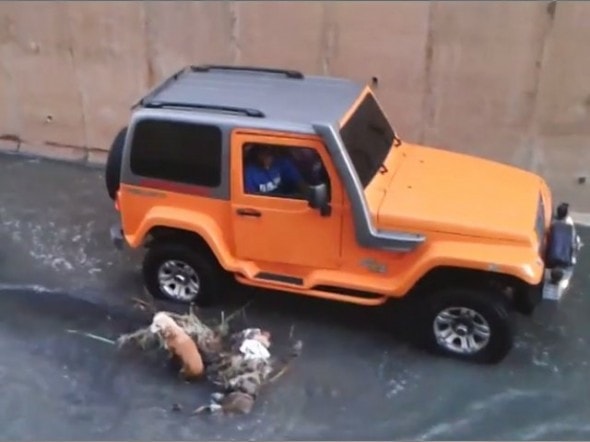 A Youtube video uploaded by Everton Severa Domingues showed when two men, on board an organge color Troller, drive down the canal to rescue the dog.

The car was driving somewhat fast, splashing water on the canal’s walls, but as soon as the vehicle gets closer to the pet, the driver decreases the speed and the passenger opens the car’s door to retrieve the pet.

The dog falls from the small pile of garbage it was on, but the rescuer steps out of the car and scoops the dog up, then places him inside the car.

Witnesses cheer and congratulate the rescuers once the dog is safe inside the vehicle.

Accroding to Uol.com the scared dog found a forever home with one of his rescuers.

We’re glad to see that there are people across the world willing to do whatever is necessary to help animals in need.