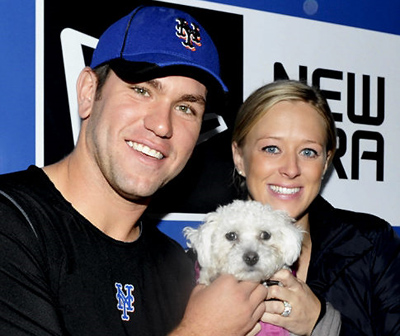 Josh Tholes and his wife Kathryn bought Maltese-poodle mix Picca from an Oklahoma breeder in 2009 as a companion for Kathryn when Josh was playing away games.

But in a matter of weeks, it became apparent that Picca was not a normal dog. “She wasn’t responding to any of the calls we gave her,” Thole said. “She would just ignore us.”

A trip the the vet revealed the cause of Picca’s quirky behavior – the dog was found to be deaf after a series of hearing tests. And while that disgnoisis would likely lead many to return a pet, for Thole that was never an option. “There was no giving her back,” he said.

Instead, the dog loving baseball star began teaching his furry companion sign language, and he says the results are impressive thus far. “She knows sit, stay, that kind of stuff,” Thole told the Daily News. “She’s an inside dog. She’s very good. She really minds her own business.”

An expert on deaf dogs from the ASPCA noted that Thole’s training is likely to be more effective than verbal training that most dog owners use. “We tend to use words too frequently,” she said. “Dogs don’t understand human language.”

The baseball star did note that living with a deaf dog has its advantages, saying that Picca gives him regular workouts. “If I was to go up to get the mail or something, my dog would follow me and take off,” he said. “I couldn’t call her. I’d have to chase her.”