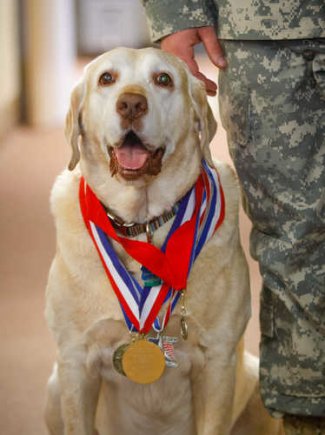 The Hero Dog Awards were held by the American Humane Association on October 6th. Gabe, a retired military dog who completed more than 200 combat missions in Iraq won the top honor of being named American Hero Dog of 2012.

There were 8 finalists for the hero dog award one from each of the 8 categories the contest has; Law Enforcement & Arson Dogs, Service Dogs, Therapy Dogs, Military Dogs, Guide Dogs, Search and Rescue Dogs, Hearing Dogs and Emerging Hero Dogs. Gabe represented the Military Dogs category and nabbed the top honor.

The public voted on the finalists and the winner was then selected by a panel including celebrities and the handlers and owners of last year’s finalists. All the finalists won $5,000 for their designated charity. Gabe won an additional $10,000 as the winner. Gabe’s charity is the United States War Dogs Association. The charity provides care packages, including ear muffs and dog booties, for deployed soldiers and their K-9s. The charity also helps with the expenses of military working adoptions.

Gabe was rescued from a pound in Houston and adopted by the military. Gabe is now retired from the military, where he spent years working with his handler Sgt. 1st Class Chuck Shuck sniffing out insurgent bombs, guns and ammunitions. He completed over 210 combat missions and had 26 finds of explosives and weapons. He also would visit wounded troops to help boost their morale. Gabe retired in 2009 after earning 40 awards and coins of excellence for his work. Gabe continues to visit schools to inspire children.

The American Hero Dog awards will be broadcast on the Hallmark Channel on November 8th.