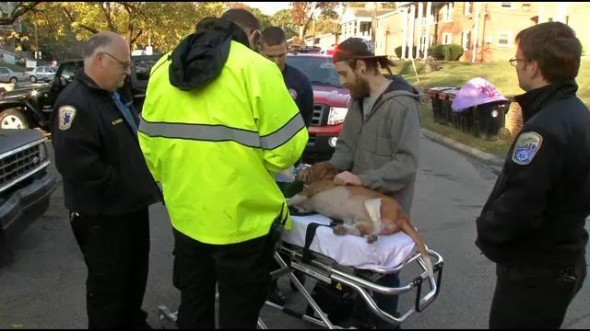 For Cash, a dog that was trapped in a burning building this morning, his new hero’s are the firefighters who saved him.  The fire started in a small apartment building in Louisville Kentucky around 8:30 am.  Unfortunately for Cash, his owner Billy Carr, was not in the apartment at the time so the 3 year old dog was trapped inside with no way out.

“I just ran up screaming my dog was in there.  One of the captains pulled him out from under the bed and brought him out.  Luckily, it was in the kitchen and not the bedroom so he was able to hide,” said Carr.  Firefighters had to use oxygen on Cash, but say that he will recover just fine.  Saving pets using oxygen masks is becoming more and more common and many firefighters and other first responders are receiving special training in how to save animals.

Carr is very grateful that they were able to get to Cash, and even more so that they had the knowledge to treat him and save his life.  No one else was injured in the blaze, but one couple who is planning to be married this weekend was forced out of their home.