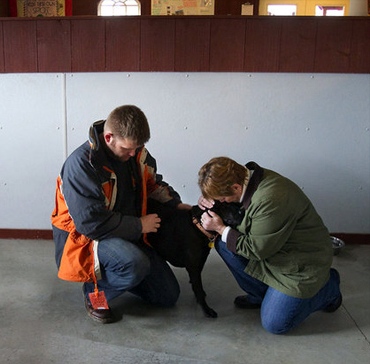 As tensions between North and South Korea rise, Americans stationed in the region are preparing for evacuation – for themselves and their pets.

Matthew and Debbi Chapman count themselves among those ready to leave if necessary, but faced a challenge when it came to their pets: they have three dogs, and they have learned that in the case of an evacuation, they could only take two with them – leaving one potentially stranded. Matthew is an explosives specialist in the Army stationed in Seoul, South Korea.

Rather than live with the risk of uncertainty, the Chapmans made the difficult decision to bring their dog back to the states for safe keeping. Painful as the separation may be, the Chapmans have the peace of mind of knowing that their best friend will be well cared for, and is guaranteed safe haven until they return to the US.

Their dog Dehlila is now enrolled in the Canine Corps at Paw Prints Dog Sanctuary, a free “home away from home” for dogs of deployed Pennsylvania military personnel in Landisburg, PA. Members of the Corps are taken in when their owners are deployed and need long term care for their companions. Dehlila is one of 13 current military pets at Paw Prints. The nonprofit sanctuary also houses senior dogs and dogs with special needs from rescue groups that need homes. The dogs are walked and spend time playing and snoozing on blanket-covered couches.

Seeing the facilities where Dehlila would be staying and playing was a relief, Debbi Chapman said. “What can we do to help you guys?” she asked the Sanctuary’s co-founder, U.S. Marine veteran Kevin McCartin, as she and her husband prepared to leave.

17 thoughts on “Military Family Forced to Leave Best Friend Behind”