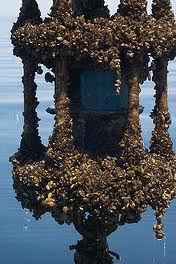 If you boat on a Minnesota lake you may have a new dog sniffing around. If he’s a brown Labrador retriever named Brady, he and some of his friends are looking for one of Minnesota’s sliest invaders, Zebra mussels. The sneaky mollusks are invading Minnesota’s lakes, rivers and wetlands but Brady, Digger and Laina are on the case.  The three canine agents will join the over 125 human Department of Natural Resources (DNR) agents in the battle to find the invasive zebra mussels and remove them from the 100+ Minnesota lakes already infested with the unwanted immigrants that clog water intake pipes, cut swimmers’ feet and disrupt the ecosystem.  The mussels often elude human agents armed only with their own eyes. Canine agents have much stronger weapons, their noses, to find the mussels.

The dogs circle boats and trailers as they sniff for the unwanted mussels. When they smell an undesired mollusk the dogs sit down to show their human handlers the game is over for now. The handlers reward the dogs with a ball. Although all three dogs are new to this work Brady and Digger, a rescued male black Labrador retriever, quickly proved their worth by finding zebra mussels in a trailer’s light casing.  The dogs’ noses make them faster and more accurate than their two-legged colleagues. Zebra mussels often go undetected as boaters haul their boats into and out of state lakes.

Laina, a female Belgian Malinois, and Brady, also a rescued male Lab, are also being trained to detect wildlife such as deer to help find poachers and could also be trained to smell firearms.

Minnesota is only the second state to add dogs to the DNR roster to search and definitely not rescue zebra mussels. California has over a dozen dogs working on this project. If Digger, Laina and Brady do a good job more dogs could be added to the DNR team. That would be a major win-win for humans and dogs. Both Brady and Digger were rescued from shelters.

So if you see one of these furry DNR agents sniffing around your Minnesota boat or trailer, give them some room. They’re making sure the striped mollusks don’t “muscle” into your waterways.