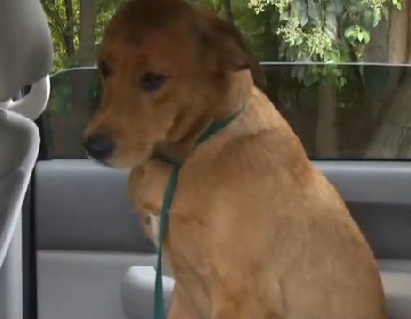 When nine-month-old Bear didn’t make it out of the fire that destroyed their South Carolina home, the Hebbards were devastated. But to everyone’s surprise, he was found by firefighters – alive.

“[The house] was engulfed in flames and there was smoke everywhere,” Troy Hebbard explained. “The windows were blown out, fire was pouring out of the chimney.”

His 16-year-old brother, Ryan, tried to brave the flames to save Bear and their other dog, Ginger, but the billowing smoke became too thick for him to breathe. Nine-year-old Ginger managed to get out, but Bear was still trapped somewhere inside.

Hours passed as firefighters battled the blaze, calling the house “a total loss.” The family could only helplessly watch as the fire claimed the life of their Rottweiler-golden retriever mix.

But as firefighters worked to “surround and drown” the fire, making their way through the home, they found Bear hiding in a basement closet – the only part of the house not touched by flames.

His home was ravaged, but father John Hebbard managed to remain optimistic.