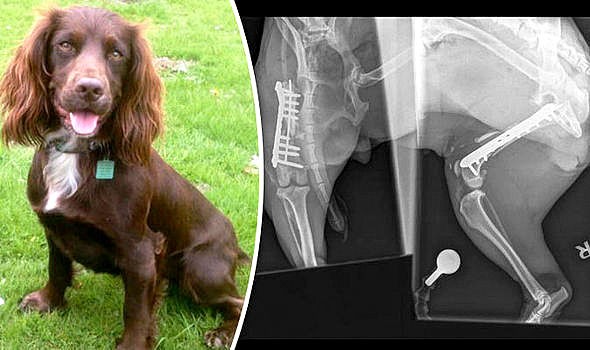 When two-year-old Darcy, a Cocker Spaniel from the UK, plummeted over the side of a 60-foot concrete dam, major organs were pierced and numerous bones were broken.  Vets were astounded she survived.  But survive she did, and now she’s won a special award for completely recovering just months later.

Gordon and Wendy Lyon had taken Darcy for a walk in the Scottish Highlands when she got away from them and leapt over a five-foot wall, having no idea what was on the other side.  Her body was battered all the way down the side of the steep rock wall of the Glascarnoch Dam.

“We heard her ‘scream’ and then silence.  We have no idea why she suddenly decided to jump,” Wendy told Express.

“We expected the worst and ran to look over the wall.  Miraculously, she survived the fall and was looking up at us. But we could see she was badly injured.”

They were in a remote area, an inn the only inhabited place for miles, so it took a long time for emergency responders to arrive. 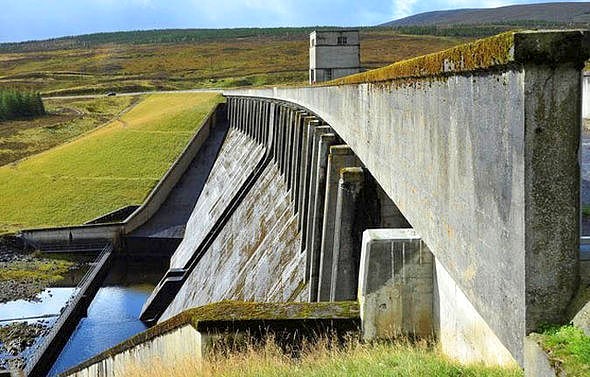 “We were absolutely distraught as we couldn’t reach her. It took a while for the fire brigade to arrive as we were in the middle of nowhere,” Wendy explained.

“When the firefighter carried her up the ladder, hypothermia was setting in and she was slipping in and out of consciousness, but she still managed to nuzzle his cheek.”

She was taken to a vet 30 minutes away, who were able to stop the internal bleeding she was suffering by removing her ruptured spleen.  But she was still very badly wounded; air was leaking into Darcy’s chest, her liver was damaged, and her pelvis and legs were fractured and dislocated. She was then transferred to the Parkside Veterinary Group in Dundee for treatment, including plates and pins in her legs.

Amputation was considered for one of her legs, but amazingly, within two days, Darcy was standing up, wagging her tail, and begging for food.  Over the next several months, this stalwart dog underwent hydrotherapy, physiotherapy, and acupuncture as part of her rehabilitation. 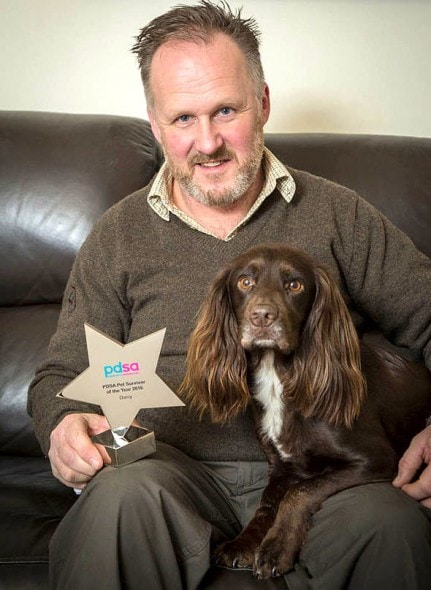 “Darcy’s vets were extraordinary, they really went above and beyond for her. The treatment has cost thousands of pounds, thankfully her insurance has covered a lot of that although we have still had to pay for some parts of her rehab,” Wendy said.

“The costs do mount up, but when we see her happy and running again it’s totally worth it.  We’re blown away that she’s now won PDSA Pet Survivor (People’s Dispensary for Sick Animals)– it’s a wonderful end to what has been a very difficult year.”

“Darcy has come through such a traumatic experience, and our huge thanks go to all the people, too numerous to mention, who have helped her along the way,” Gordon added.

“We’re beyond delighted that she has now won such a prestigious award, particularly against such worthy competition.  Thanks to all who voted for Darcy to be named PDSA Pet Survivor 2016.”