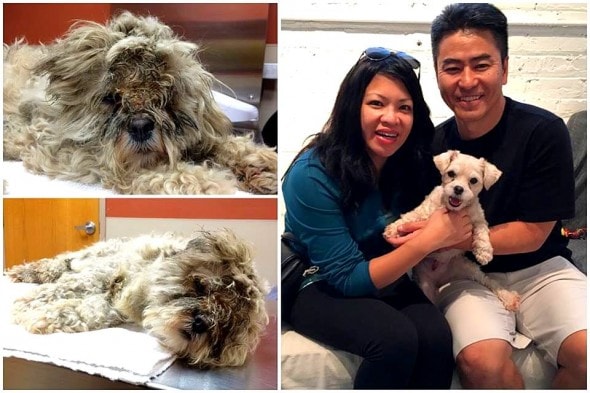 Remember Antonia?  This poor girl was found behind some garbage cans in Chicago.  She had a raging fever, and her face was crawling with maggots.  She was saved by Trio Animal Foundation, and today she is living a comfortable life in a suburb where she is the apple of her parents’ eyes.

Here is what TAF had to say about her:

On September 2nd, TAF was called about a dog that had been found behind garbage cans in an alley on the south side of Chicago.

The pup, named Antonia, was aged at around 1-year-old and she was in critical condition. Antonia had a fever of 105 degrees, was lethargic and maggots had burrowed under her face, head and neck. Since the fur on the back of her neck was so densely matted, you could only see those maggots when they popped out around the edges and through her ear. Between Antonia’s eyes and snout, maggots fed off of her infected tissue that smelled like rotten meat.

Ironically, it would be Antonia’s severe ear infections that would end up being her biggest and most painful struggle. It would take a month to finally rid her ears of pain and dangerously high levels of bacteria deep in her ear canals.

Antonia’s skin was treated like that of a burn patient and it would take weeks to heal. Even though the maggots were gone, Antonia appeared to be trying to wipe them away with her paw as if she had posttraumatic stress disorder. This was truly one of the worst cases of emotional/physical abuse that we have seen… she was tortured and her pain consumed her. 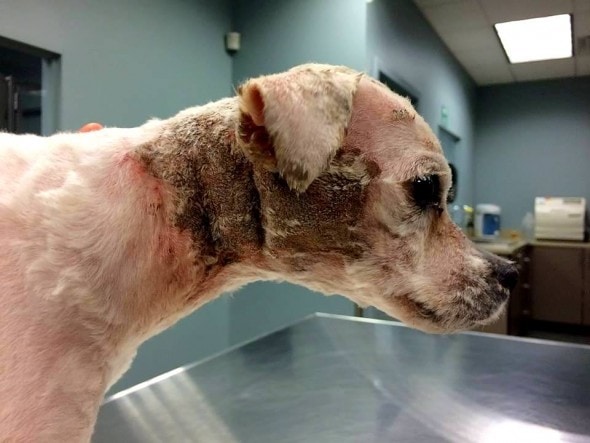 After hospitalization and weeks of doctor appointments, Antonia began to feel comfort and was paired up with TAF’s therapy dogs. She stayed with Miller, Antler and Hazel Grace and was brought to Unleashed Pups to interact with people. It was very slow at first but once she started following Hazel Grace’s lead, Antonia began to trust people.

Well, we at TAF couldn’t be any happier to announce that Antonia has made a full recovery and has found her perfect forever home!

When Antonia first met her potential parents, it was like a weight had been lifted off her shoulders. She immediately bonded with them and even played. This was the first time that she had done this with strangers. For anybody who has ever worked with abuse cases, this is one of the most beautiful and rewarding things to witness… she had come so far and found it in her heart to trust again.

Antonia now lives in a quiet suburb of Chicago with a mom and dad that adore her. She will be their one and only love and not a day will go by that she will ever think otherwise. From here on out, she will have a beautiful life.

TAF has to thank everybody that prayed for Antonia and financially contributed to her medical expenses. It truly took countless TAF supporters to put this little girl back together again and we cannot thank you enough… bless you all.