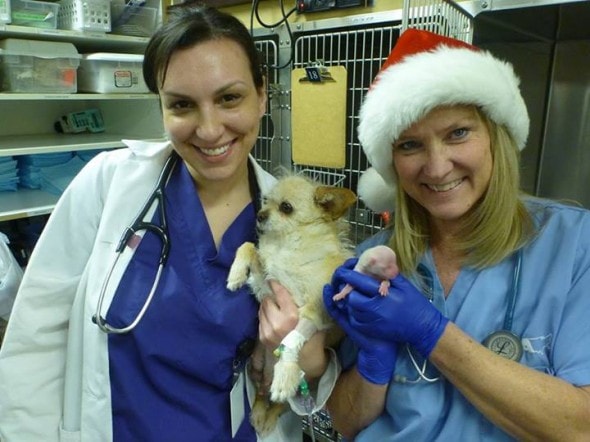 Veterinarians at an Aurora, Colorado clinic tried desperately to save a puppy by emergency C-section on Monday, but when technicians were unable to get the puppy to respond they assumed they had lost her. Then 45 minutes later a crying noise came from the blanket the puppy had been wrapped in.

On Monday, a small dog came into the Aurora Animal Shelter in labor. After an exam the veterinarians realize the puppy was too large and needed to be removed with an emergency C-section right away.

“It was obvious the puppy had been stuck for a long time. There was a lot of infection and very little chance for the puppy,” said veterinarian Nicole Bartley. “However, we always try to save puppies and kittens born by C-section and the veterinary technicians went to work, but the puppy never breathed, never moved.

Believing the puppy to be stillborn the veterinarians switched their focus back to the mother dog to make sure she made it safely out of her surgery. As the mother dog came out of surgery, a miracle happened.

“We were just starting to wake the mama dog up from anesthesia (45 minutes later) when we heard a sound from inside the blanket where the puppy had been wrapped,” said Bartlett. “It was alive! And crying for its mama!”

The veterinarians were shocked that the puppy could possibly be alive that much later after it wouldn’t respond. The only fitting name they could think of for the puppy was Miracle.

Miracle and her mother spent the night under constant monitoring and went into foster care the next day.