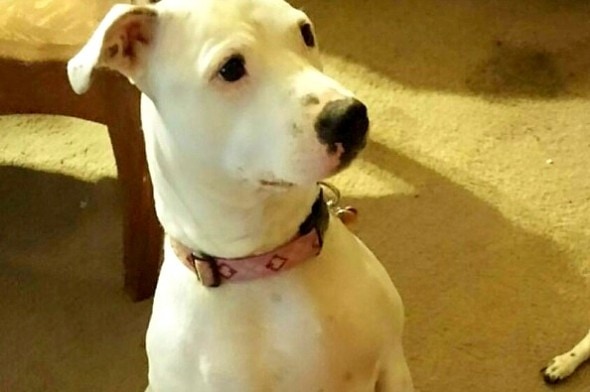 An Indianapolis family rejoiced when they got the call that their missing dog had been found.  Their relief was short lived, however, and they soon learned that Diamond had been badly tortured.  But because of what the family considers to be miracles, Diamond will get the help she needs.

On Monday morning, Kirk Knisely got the call every owner dreads:  his dog had gotten out.  As his 12-year-old son was getting on the bus to school, Diamond bolted out of the yard.  Knisely was working, and could not leave to go find her.

The family spent the next 36 hours searching for her, and was relieved to get the call that she had been found about a mile away.  When Knisely found her, he was horrified.

“It was just awful. Her head was bleeding and burnt and her right eye was closed. … It was heartbreaking,” Knisely said.  “I’m 47 years old, and I’ve seen a lot of things, but I’ve never seen anything like that.”

Diamond’s head had been burned black.  One wound was so deep that her skull was exposed.  Her fate looked grim.  The family took her two to animal hospitals, and was told skin grafting and other treatment would cost between $5,000 and $8,000. 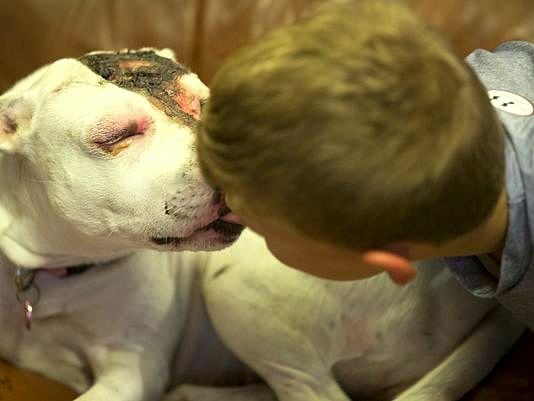 They decided to see what help could be given at the Purdue University Small Animal Hospital, and that’s when Knisely said a series of small miracles occurred.

“At Purdue they said they could clean up the wound and give her some other treatment for about $150 or $170,” Knisely said. “Me and my stepdaughter were gathering the money to pay, but an older lady in the lobby saw Diamond and overheard what was going on. She got up and said, ‘Here is $50. I want your dog to be okay.’ Then her friend stopped and gave us $100 to help, and I just lost it. I started crying and had to walk away. They were like two angels there to help us.”

Diamond means the world to the Kniselys, and they will always do whatever they can for her.  Kirk found the pit bull-boxer mix two years ago.  She was in really rough shape, and he took her in.  His son Jamie instantly bonded with the year-old dog.  The attack has been especially hard on him.

Veterinarians determined that someone intentionally injured her.  Knisely’s stepdaughter started an online fundraiser to help cover the costs of the expensive surgery, and amazingly, thousands of dollars have been donated in only a couple of days.  It looks like Diamond will be getting better sooner than the family thought.  For now, they’re just taking every moment as it comes.

“We have a routine that when I get up in the morning for work and brush my teeth and put on my work boots, (Diamond) sits by my feet,” Knisely said.  “This morning she did it for the first time since she went missing, and it was so touching. It’s amazing that she is still barking and wagging her tail after what she has been through.”