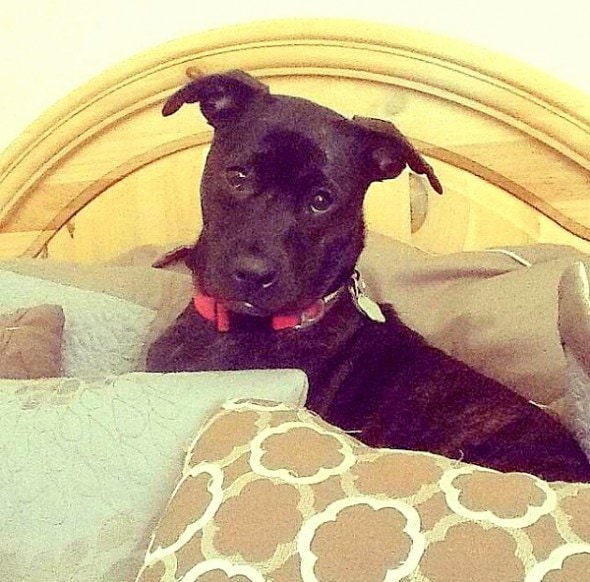 I still remember when I first saw her… she was curled up in the back of the kennel scared for her life.

Backtrack to a week before: my family’s beloved golden retriever was dying.  He was probably the best dog I’ve ever known; Bailey was my dream dog. This dog was no Bailey – she was small, timid and unnerved. I could tell she hadn’t come from a good place.

I came to the shelter two days before Bailey passed away, hoping to find a dog I could foster and give a little love.  I didn’t expect to be taking any dogs home to keep. I already owned another dog, Lola, the “gentle giant,” as I liked to call her – 60 pounds of Australian Shepherd mix who loves to run and play fetch.  However, my boyfriend convinced me to think about fostering since I was feeling so down about Bailey.  He thought it would be a chance to help another needy animal.

I agreed to go “take a look.”  I walked into the shelter – a dark and dingy place that wreaked of animal urine. I searched the kennels looking for something to pop out at me and that’s when I saw her. She was nervous and skittish, but in spite of that we asked the kennel assistant if we could take her out to the play pen. Her exact words were, “you don’t want this one, she bites.”  I looked anxiously at my boyfriend, but proceeded to take her outside anyway. The lady gave us a tennis ball to throw and although the dog seemed apprehensive to get it, she obliged.

I knew right then that this scared & battered dog would need to come home. I told my boyfriend I would take her, and two days later I had a new dog. She was so happy to be out of that kennel – she was full of life. Today Reecie is almost a year old, she has come from a background on the streets, starving for food and likely beaten, but now she has a happy and fulfilled life with Lola and me.