Mekane, a certified wilderness air-scenting dog, went missing on Wednesday, October 8, 2014, during a routine exercise in New Columbia, Penn. Though rescuers and animal lovers alike searched the area since she went missing, the rescue dog was not found until three days later. 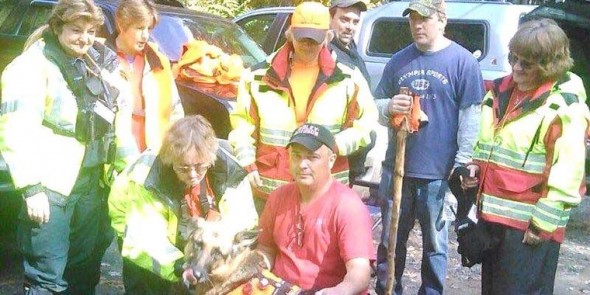 During the “live-find search,” a person hides and the air-scenting dogs are set lose to track the “missing” person. The dogs can get distracted and lose their course, but it is unlikely for this to happen since the tracking dogs are well trained.

The team feared something had happened to the dog and they turned to the community to help them locate their beloved pet. A $1,000 reward was raised for anyone with information of the dog’s whereabouts.

Three days later, on Saturday, October 11, 2014, Mekane was found. She was thinner and thirsty, and her paw pads were scabbed.

“All I can do is cry. I can’t put it into words. It’s like seeing an angel. To have her in my arms, it was like a child that was lost and came back,” Peachey told The Daily Item.

Strike K-9 Wilderness Search and Rescue team believes someone was holding on to their dog during those three days. The day Mekane was found it was raining, yet the dog was completely dry when they found her alone in the wilderness.

“We are all soaked, and she’s totally dry,” said Paula Moor, president of search and rescue team. “We don’t know what happened. She still had her search vest on.”

The air-scenting dog was taken to the vet to make sure there was nothing wrong with her. Veterinarians expect her to make a full recovery.