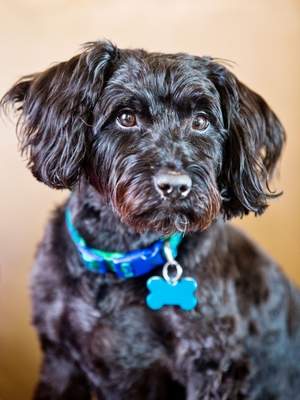 When Judy Gustas passed away from cancer her dog Elvis went to one of Gustas’ nurses. Elvis’ first night home with his new owner he ran from the home. Where he was found days later amazed a lot of people.

When Judy Gustas was battling cancer her Schnauzer-Poodle mix Elvis was a big comfort to her. Gustas loved animals. She left twenty percent of her will to animal-rights groups. Gustas wanted her daughter, Gayle Johnson, to take care of Elvis. Johnson felt she couldn’t take Elvis because she already had several dogs and a young child to care for. One of Gustas’ nurses volunteered to take Elvis instead.

On Elvis’ first night in a new home he bolted out the door and went missing for over a week. As the days passed Johnson feared that Elvis had died from the cold or had been hit by the car. She didn’t give up completely though on her mother’s beloved dog and placed an ad in the local paper. On New Year’s Eve Bill Beaty spotted Elvis in front of his home and thanks to the ad placed by Johnson he was able to contact her.

Just a shocking as Elvis being found after spending nine days in the cold was where he was found. Beaty’s home is across the street from St. Rose Church, where on December 27th Gustas had been laid to rest. Johnson was in shock. Elvis had never been to the Church or even that part of town. The church wasn’t the one Gustas normally attended, but Gustas’ sister’s church. “Maybe Elvis was there during the funeral,” Johnson said. “And we just didn’t see him.”

People are amazed by Elvis’ ability to find the site of his owner’s funeral. “It’s unbelievable,” said Pam Wiese, spokeswoman for the Nebraska Humane Society in Omaha. “It boggles my mind that some animals have such perceptive abilities.” Elvis’ vet Dr. Garner said her scientific side says maybe it was just a coincidence. “The other part of me says maybe he knew she was there. This just reaffirms my belief that there’s more out there than we know.”

Elvis was found but he still needed to be brought to safety. When Beaty called his name he ran off. Johnson and her husband drove around until they found him. However, even ham wouldn’t bring Elvis close to them. It wasn’t until Johnson brought one of Gustas’ blankets down near the dog that he finally came over and laid down on it right next to Johnson. She wrapped Elvis up in the blanket, held him tight and took him home.

Elvis was dirty, greasy and cold. He had otherwise survived his nine days in the cold remarkably well. After Elvis was cleaned up and welcomed by Johnson’s other dogs she realized that Elvis should live with her, just like her mother wanted.