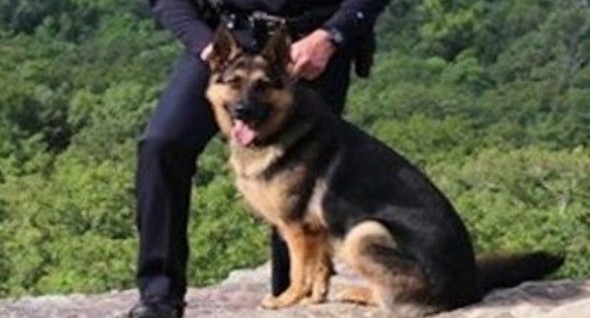 As Arkansas mourns the sheriff’s deputy killed by a gunman this week in Sebastian County and two other officers recover from the injuries they sustained during the incident, a bit of good news helps temper the sadness.

Kina, the wounded police dog that ran off after being shot by the man who stands accused in the police shooting, has been found alive.

Kina was discovered in a nearby house that is currently under construction; she was up and walking at the time. The dog was shot twice after Billy Monroe Jones opened fire at officers responding to a domestic disturbance call, authorities reported.

Sheriff’s Col. Bill Cooper was killed, and Hackett Police Chief Darrell Spells was grazed in the head by a bullet. A veteran cop with 15 years with the sheriff’s department under his belt, and prior service with the police force in Fort Smith was touted by his peers as a decicated and well-liked officer. He was nearing retirement.

The police dog was being treated by a veterinarian underwent x-rays on Friday. The Arkansas Times reported the medics’ initial findings: “X-rays show some bullet fragments in Kina. Two inches lower on one shot she would not be here. She is dehydrated and about to receive fluids. We will advise should something change.”

Kina is expected to recover.