Fair warning: this post is what we’d call “hil-orrible.” It’s hilarious. But it’s horrible. And if you have a weak stomach, you may want to opt out. Consider that before you continue….

Jesse Newton is a dog owner. And a Roomba owner. His Roomba has been reliable in cleaning his floors for awhile now. And Evie, his dog, has been reliable in not soiling them with steaming piles of what we dog owners know is just a part of dog ownership. Even the best of hot streaks is occasionally broken, however, and alas, Evie left her master a present in the living room. Not long after, the Roomba began its dirt patrol.

What happened next was the stuff of nightmares. Hilarious, disgusting nightmares.

Naturally, the Roomba was undeterred by the dog poop, plowing through the obstacle with ease and summarily spraying, dragging and trailing it throughout Newton’s apartment.

Newton illustrated its journey in this phenomenal, modern-art-meets-Arthur Murray diagram of a travelogue. 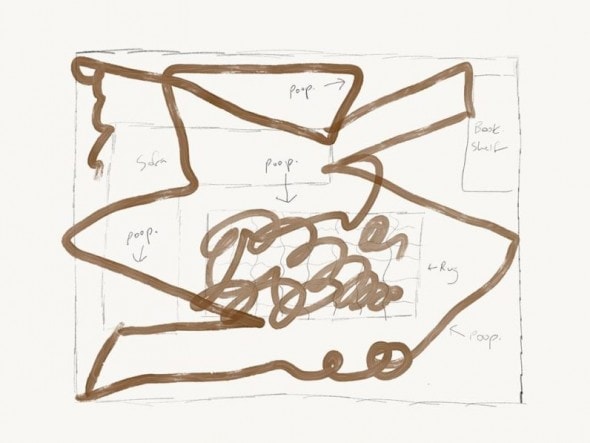 Then, when your four-year-old gets up at 3am to crawl into your bed, you’ll wonder why he smells like dog poop. And you’ll walk into the living room. And you’ll wonder why the floor feels slightly gritty. And you’ll see a brown-encrusted, vaguely Roomba-shaped thing sitting in the middle of the floor with a glowing green light, like everything’s okay. Like it’s proud of itself. You were still half-asleep until this point, but now you wake up pretty damn quickly….”

And of course, after finally absorbing the extent of the horror show, the cleanup must begin.

“Then you get out the paper towel rolls, idly wondering if you should invest in paper towel stock, and you blow through three or four rolls wiping up poop. Then you get the spray bottle with bleach water and hose down the floor boards to let them soak, because the poop has already dried. Then out comes the steam mop, and you take care of those 25-ft poop trails.”

Unbelievably, Newton actually tried to save his $400 appliance but the poop had completely permeated its insides. The silver lining was that catalog retailer Hammacher Schlemmer, from which Newton had purchased the Roomba, offered to replace it free of charge.

Hopefully Evie will refrain from leaving any more gifts of this nature!