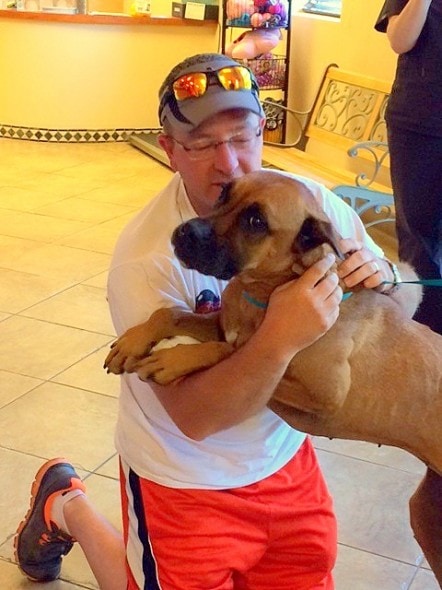 While celebrating graduation from college, Mark Finster got the phone call he’d dreamed of for five years – his dog, who went missing five years earlier as a puppy, had been found.  Lily immediately remembered her family and home, and was exhilarated to be back.

Mark figured all hope had been lost when Lily disappeared five years ago.  After a month-and-a-half of intensive searching, including posting flyers and calling every vet and shelter in the area non-stop, Lily was nowhere to be found.

“Because she was chipped, we were hoping that somebody would bring her in and they would scan her,” Finster said.

Five years and 200 miles later, at Best Friend Veterinary Hospital in Braselton, Georgia, Lily turned up!  Other than being taken for breeding purposes, Finster had no idea how she ended up 200 miles from home.

Finster had just fired up the grill, celebrating his newly achieved bachelor’s degree in business administration from Shorter University, when the call came through, and the man could not believe his ears. 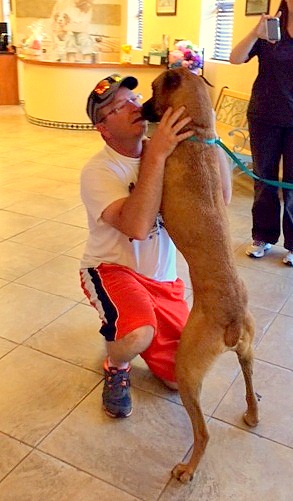 “They were so excited,” said Stacy Yarberry, hospital manager at Best Friend.  “The man teared up. He was like ‘Are you kidding me? My dog has been missing for five years!’ His wife started bawling in the background.  They were so happy and so stunned.”

When Finster and family arrived to pick Lily up, it was like no time at all had passed.  She recognized everyone immediately.  Employees remarked that they had not seen Lily this excited since coming to the hospital.

“She was playful, but when I called her name, she just took off running to us,” said Finster.

A client had brought Lily in to the hospital, where they checked her for a microchip right away.  She was in mediocre condition, if a little underweight, and dealing with a bit of a flea and tick issue.

Finster says now that she’s home, it’s as if she never left.

“When she came home, she went straight to the kitchen to her water bowl. She knew exactly where she was,” said Finster. “It’s amazingly evident that dogs can remember that far.”

Finster says he and his family could not be happier to have Lily back.