On May 5, 2014, a stray pit bull from Dekalb County, Ga., patiently waited along high school children on a bus stop. When the yellow school bus showed up, the dog made his way to the front on the line, hopped on the bus, and sat on a seat to be taken to school as if he were a two-legged human. 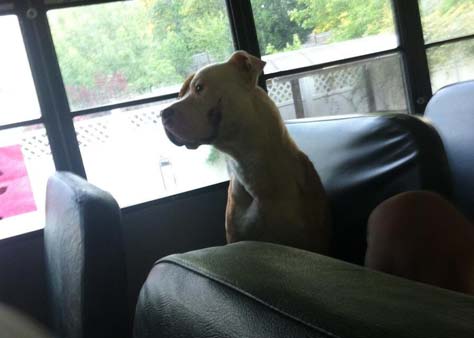 The bus passengers along the bus driver were amazed that the friendly stray was just waiting to be taken on a bus ride, but as school policy dictates – no animals allowed – the canine passenger needed to get off the bus.

My Fox Atlanta reports that the bus driver tried to lure the dog off the bus using crackers, but the four-legged passenger was not interest in those treats.

The bus was evacuated for the safety of the children and then local parents who also witnessed the event tried their best to get the dog off the bus. At last, a local resident brought over a plate of some tasty left-over food the canine could not pass on.

The friendly pet exited the bus, ate his meal and took off.

It is unfortunate the pet was not rescued by anyone of the people present, nor was Animal Control or a Rescue group called to secure the pet. The pit bull did not show any signs of aggression, and overall his demeanor was of a loving dog that wanted companionship, food, and lots of love.

Since the news went viral, hundreds of animal lovers have shown interest in finding the dog and rescuing him. Hopefully, local residents will be looking out for him and soon we can report that the stray has been found and adopted.