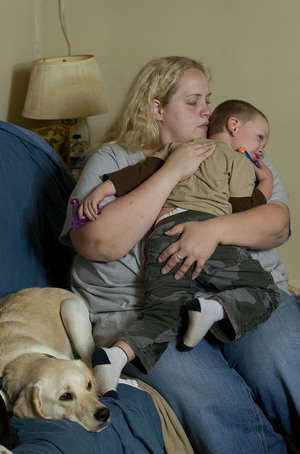 Two-year-old Jakob Heintzelman went missing Tuesday afternoon for over 10 hours. Not only did a police dog help find him, but Jakob’s own dog was by his side the entire time he was missing.

Around 6 p.m. on Tuesday afternoon Brandi Mumaw realized her son Jakob and his yellow Labrador Retriever Chance were missing from their home in Woodstock, Virginia.

“I didn’t even wait 10 minutes before I called 911,” said Mumaw. “Because I knew it was going to get dark soon and I knew they needed daylight.”

Soon police and neighbors were all searching for Jakob and Chance. For more than ten hours over 250 people were searching for the pair by foot, water and air.

Finally around 4 a.m. Master Deputy Chris Snyder from the Fauquier County Sherriff’s Office and his bloodhound Judge found Jakob and Chance in the woods a half mile from their home. When Snyder and Judge got close to the lost boy and his dog, Chance started barking.

Jakob was taken to the hospital to be checked out and he is now safe at home with his mom and his protector Chance.

Chance normally comes home when called, and with the tow only half a mile from their home Mumaw knows Chance heard his named called when her mother called for him.

“He stayed with him,” said Mumaw. “It’s not like him not to listen to her. He was indeed protecting him.”

Mumaw is thankful to Chance and to the hundreds of volunteers who searched for Jakob.

“It’s really refreshing to know that people will stop their lives so I can continue mine,” She said. “It’s truly remarkable.”