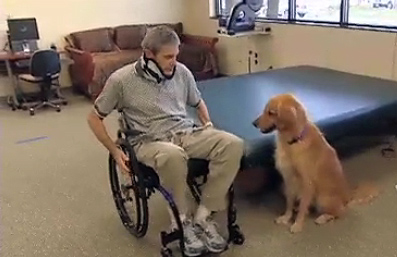 Paul Horton has much to be thankful for -including the love of a very devoted dog – after a paralyzing bicycle accident nearly took his life. The 57 year old Texas man was taking a spin with his trusted companion Yogi when a routine maneuver over a trail obstacle went awry, sending him over the handlebars and paralyzing him from the chest down. “I went over the handle bars and landed on my head on the concrete … and life changed,” said Horton.

Horton lay motionless for nearly an hour with no help in sight. Yogi, (who had remained by his side) decided it was time to act and found a neighbor and his wife hiking nearby. Bruce Tate, was walking down Mountain Trail when they were met by Yogi. “Yogi is a quiet, happy dog, he’s never noisy at all, but he was barking furiously to get our attention,” said Tate.

The Tates followed Yogi through the woods to Horton and called 911.

“For somebody who cannot move and cannot ask for help, you can develop a pressure ulcer, you develop an infection, a clot, and you can die if you are not rescued soon,” said Dr. Juan Latoree, the Medical Director of St. David’s Rehabilitation Hospital, “so I think the dog was critical.”

Horton agrees. “He is my hero, I mean he is my hero. It is possible that if he had not done what he did, they might have walked right on by and gone down the road and there is no telling when somebody else would have come by.”