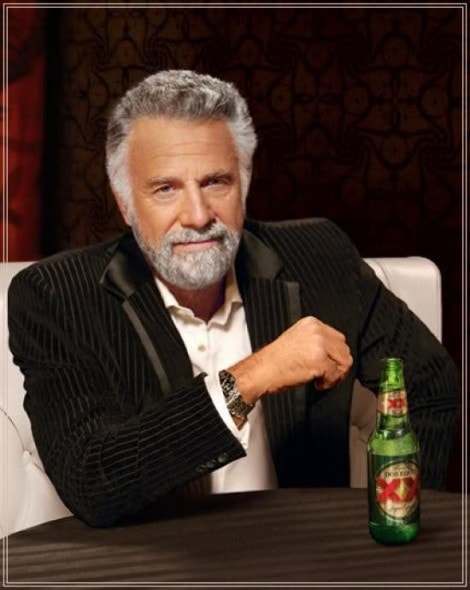 When The Most Interesting Man in the World isn’t drinking Dos Equis, he’s helping to fight canine cancer. TMIMITW, played by actor Jonathan Goldsmith, is the most recent celebrity to take part in outdoor lifestyle brand Orvis’ photo contest campaign to raise money for the research and treatment of the deadly disease.

Every year, Orvis, who sells high end outdoor clothing and dog supplies, runs a contest to find a canine cover model for its catalog, which brings in donations to the Morris Animal Foundation. MAF is a “nonprofit organization that invests in science that advances veterinary medicine for companion animals, horses and wildlife.”

For more than 60 years, the “Morris Animal Foundation has invested more than $70 million toward 2,000+ studies, and these studies have led to significant breakthroughs in diagnostics, treatments, preventions and cures for animals. Some of the breakthroughs funded through the Foundation have become gold standards in veterinary care.”

Orvis has raised nearly a million dollars for the project. They allow pet owners to send in photos of their dogs for a chance to be on the cover of their catalog. To help raise awareness, celebrities take part in a video campaign.

In the past, Betty White has been a spokesperson for Orvis. This year, Jonathan Goldsmith was filmed in his Vermont home with his Anatolian shepherd, Willy. It will be surprising for many to hear the Dos Equis guy without his signature sexy accent, but his dedication to animals makes him that much more appealing.

Contestants have until February 15th, 2014 to enter, which they can do by clicking here. The grand prize will be a one-year supply of Blue Buffalo Dog Food, a deluxe Tempur-Pedic® Dog Bed and a $500 Orvis gift card. Runners-up will receive a Fleecelock Wraparound Bed, and honorable mentions will be sent a personalized collar.