Scientists and animal lovers alike are baffled by the discovery of a mysterious stray found perched atop Africa’s highest mountain peak.

At over 19,000 feet above sea level, Mount Kilimanjaro is known for inhospitable conditions: freezing winds sweep across desert-like stony plains, making survival by any species unlikely. Which is why four tourists guided by Ahsante Tours were in disbelief when they spotted the dog on Uhuru peak. 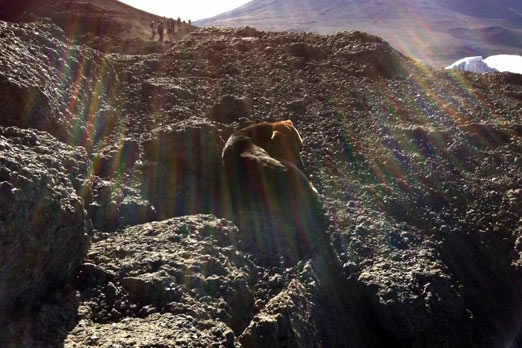 Antoine le Galloudec says he found the dog under unusual circumstances, but could not help but grab his cell phone to get a picture. In an email to The Citizen Daily, Galloudec said he spotted the dog while answering the call of nature. “As I was relieving myself I saw the dog lying about one metre away from where I stood on a rock,” he said.

Galloudec grabbed his cell phone and captured the image: now area scientists are trying to understand how the dog is able to survive in such a punishing environment, and how it made its way to the peak of one of the biggest mountains in the world.