A tiny puppy named Patches was on the absolute brink of death when she was found on a snowmobile trail in Ottawa, but thankfully she was saved just in time by a good Samaritan and rushed to a nearby vet.

“She was found just in time,” said Tera Betnaza, a veterinarian with the Ottawa Humane Society.  “She likely would have died if she spent any more time out there.” 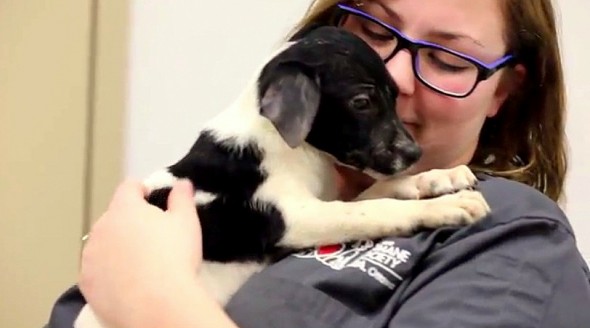 The two-month-old Jack Russell mix was found on a trail near Manotick on Tuesday.  Her body temperature was perilously low, and she had started seizing.  She was immediately taken to the clinic, where she was bundled in warming blankets and put on a dextrose drip to raise her blood sugar levels.  By Wednesday, Patches was already doing quite a bit better.

“Amazingly, because she was very close to death — it was very touch-and-go, she seems to be recovering well,” OHS executive director Bruce Roney told the Ottawa Citizen.  “We obviously have to observe her for a period of time and make sure there’s no permanent damage, but this is one lucky little dog — and a fighter. She’s a terrier!”

How Patches’ came to be on the trail is unknown – someone may have abandoned her, or she might have simply wandered off.  Anyone who comes forward to claim her will certainly be questioned, but if no one  does, she will be available for adoption in several weeks. 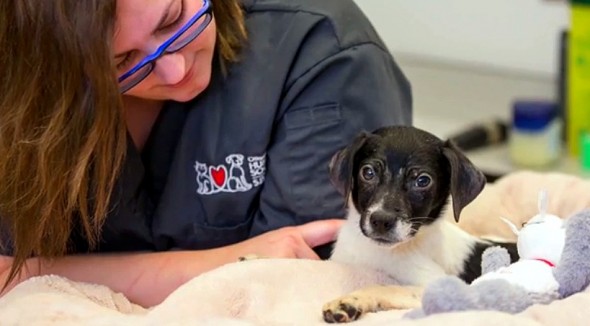 “It’s mostly observation at this point and intervention as needed, but she’s doing well and we just need to see if there are any long-term concerns,” Roney said.

A long-term effect would be brain damage due to the cold and distress.  But when puppies, who are pretty resilient, bounce back as quickly as Patches has, they will usually recover completely.