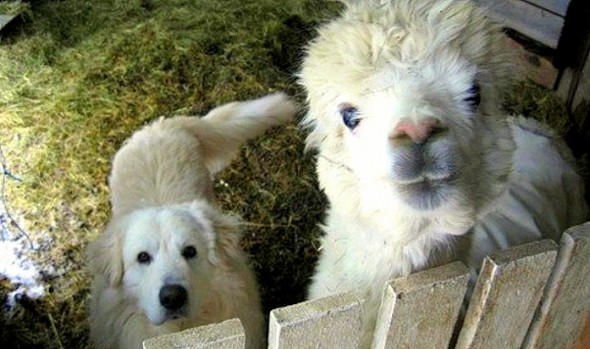 When Leo was adopted from a very abusive owner back in January, police thought finding a new home for the sheepdog would be difficult.  They couldn’t be more wrong, however, as he has now has a wonderful home with some sheep and alpacas!

“The maremmano sheepdog is a very special kind of dog that is bred to protect flocks from predators. Therefore, I had high expectations of any new home for him,” Ida Leckström of the animal protection police told Swedish newspaper, Aftonbladet.

But because he wasn’t a puppy, police didn’t think there’d be much interest in him.  As fate would have it, the perfect person expressed interest in the herding dog.  Jan-Olof Östberg has a farm and breeds sheep and alpacas, and already had other maremmanos to guard them.

“At first we did not know if it would work. It is one thing to bring in a maremmano puppy and let it grow up with the pack but quite another to take in an adult dog and try to teach it,” Östberg told Aftonbladet. “And Leo had also never encountered alpacas before.”

“He probably wondered what were the strange dogs with the long necks,” said Leckström. 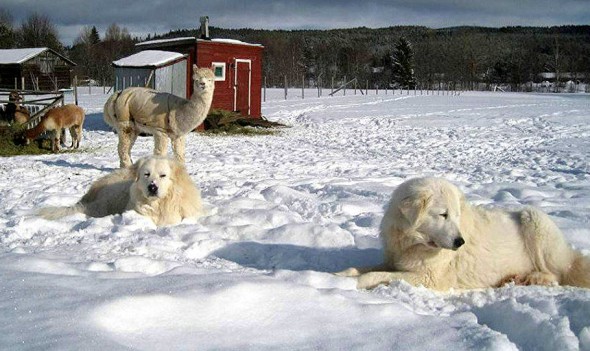 Leo got along quite well in his new home, though not without impediments.

“When Leo first met the alpacas he was skeptical of them but quickly became interested,” Birgitta Ericsson, Östberg’s partner and the co-owner of the alpaca farm, told The Local.  Nevertheless, “alpacas and dogs speak two different languages.”

“Dogs sniff each other around the back when they make each other’s acquaintance but if a dog smells an alpaca’s rear end, the dog may pay for it with a hefty kick. Leo encountered this language problem almost immediately! However, after this incident Leo quickly showed the correct behavior toward the alpacas.”

Leo was just fine after that first encounter.  After all, he’s a 130-pound dog made to handle animals like alpacas.

“The maremmano is a dog in the 60-kilogram class. They are like little polar bears and when they stand on their hind legs, they are as tall as you and me,” Östberg says. “They are bred to guard animals. Even against bears.”

“They are very clever and tough dogs and they are bred to make their own decisions to protect their flock,” Leckström added.  “I’ve seen a movie where maremmanos went to attack a bear that threatened their flock – and the bear turned and ran!”

Hopefully that won’t happen to Leo, but if it should, his herd will be safe under his watch.