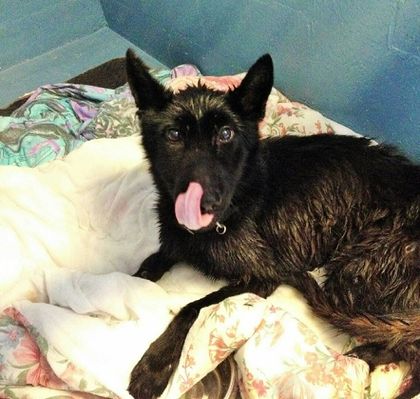 Richard Bartley was on his way home to Stouffville, Ontario when he noticed something on the side of the road.  At first, he didn’t think much of it, and kept driving.  For whatever reason, he decided to turn back, and he was glad he did.  What he found when he got back to what he saw, was a dog badly in need of rescue.

“It was unbelievable, I was at a loss for words,” said Bartley.  He’s a second-term Ward councilor for the Stouffville-Whitchurch area, which is near Toronto, Ontario.

The dog was tied to a road sign, very emaciated and badly in need of medical attention.  She was covered in open sores, and had dried feces stuck in her fur.

“She didn’t look like she was going to make it,” said Bartley.

Bella, as she’s been named, was believed to be around three or four years old, and is some sort of black Lab and shepherd mix.  When word of Bella’s story reached locals, people were all too happy to step in to try and help Bella out.  York Regional Police were called in to investigate, and some people close to the scene tried to help out with some food, water and much needed comfort.  Bartley had been on his way home from an event, and had some sandwiches that were left overs he was bringing home with him.

“I thought if this dog doesn’t make it, I’m at least going to fill it full of sandwiches,” Bartley recalled with a laugh.

Bella was then taken to a local animal services shelter to be looked at.  Upon arrival, the vets thought news was grim.  It looked as if Bella was simply too far gone, and wasn’t going to make it.

“They thought she was too malnourished,” Bartley said.

However, Bella did survive her brush with death, and is doing quite well.  There’s a very good chance that the woman fostering Bella will be keeping her on as a fulltime family addition.

“Rumor has it that the lady who is looking after her has fallen in love with the dog,” said Bartley.  “This is a very happy ending.”

Thankfully for Bella, Bartley decided that day to turn back and see what was going on with her.  This story might have had a different and much sadder ending if he’d not done that, and we’re sure Bella couldn’t be happier he did.