A 13-year-old Miniature Pinscher named Sabrina has saved her owner, firefighter Curtis Young, from cancer two times now. The first time was in 2005 when the dog discovered a growing tumor on the back of his head, and the second time, this year, when the 11-pound dog discovered Young’s skin cancer on his back.

In 2005, whenever the Brevard County firefighter would sit on his couch, Sabrina would jump up and start scratching, digging, and biting at the back of Young’s head. At first the pet owner thought his dog’s actions were annoying, but after mentioning it to his doctor, and having an MRI done, Young learned he had a cancerous tumor growing in the very same spot Sabrina would scratch.

If the pet owner had ignored the dog’s unusual actions, he would have been paralyzed within six months and dead within the year.

This year, Sabrina started to show her unusual behavior once again. This time instead of scratching Young’s head, the little dog would lick her owner’s back non-stop.

Young felt a bump on his back and a biopsy confirmed it was basal cell carcinoma, a form of skin cancer.

“[Sabrina is] beyond special,” said Young. 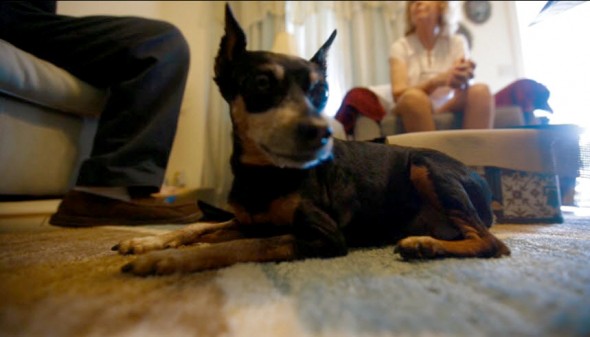 Currently there are experimental studies that suggest dogs can detect cancer, and Sabrina could be one of those gifted dogs capable of sniffing out the disease.

Sabrina might not be a certified cancer specialist, but in her owner’s eyes she is a hero.

The little dog has alerted Young to his cancer, and has saved his life.