An unrecognizable old English sheepdog was found after it was dumped in front of the shelter. Blinded by matted fur and unable to hear, the terrified dog was wrapped in a cocoon of 30 pounds of tangled hair that literally threatened to kill him. Two-inch long claws made walking a chore, and the dog was unable to hear through the mats surrounding his head. 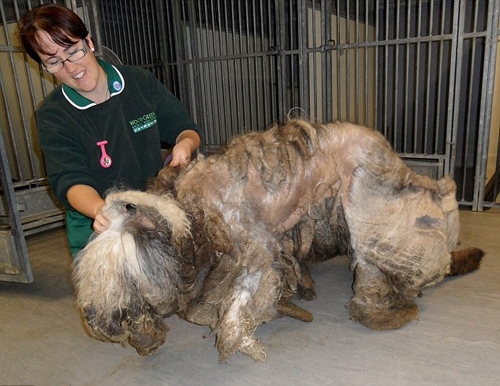 A team of vets and nurses freed the dog from his painful state by giving him a haircut –  a two hour emergency procedure that included nail trimming and removal of cysts and grass seeds from his ears and paws. 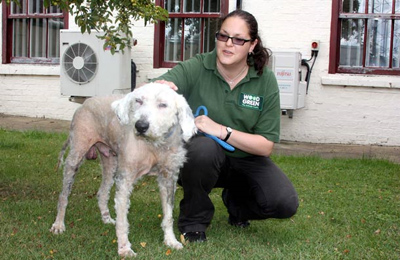 photos ©SWNS
‘Floyd’ is estimated to be ten years old, and Wood Green shelter workers say they don’t think he has ever been groomed in his life. In fact, his skin was so damaged that they don’t believe his coat will recover and grow back. Vets will now begin the process of addressing other lingering issues – Floyd will require extensive dental work, eye, ear and skin treatments, but is said to be recovering well, enjoying his freedom after spending years imprisoned by his own coat.