While bear sightings in Juneau, Alaska’s neighborhoods aren’t exactly a rarity, a local woman’s reaction to one as it attempted to snatch her dog was anything but ordinary.

22-year old Brooke Collins says she let her dogs out for their routine evening bathroom break when a black bear approached and snatched her dachshund, Fudge. Collins said she never saw the bear when she let the dogs out at 7:30 Sunday evening, but she heard Fudge screaming and turned to see a bear crouched over her dog, biting the back of it’s neck. “That bear was carrying her like a salmon,” she said. 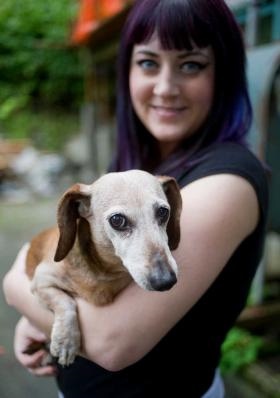 Collins says instinct took over: without thinking, she dashed across the yard and punched the bear squarely in the face.

“It was all so fast. All I could think about was my dog was going to die,” said Collins. “It was a stupid thing but I couldn’t help it,” she said. “I know you’re not supposed to do that but I didn’t want my dog to be killed,” she told the Juneau Empire.

Collins said Fudge was more shocked than he was injured, and didn’t require veterinary care. She does admit that she has learned an important lesson, and plans to keep her dogs close while – being more mindful of bears. “It’s definitely changed my opinion because I never thought one would attack my dog,” she said.

9 thoughts on “Woman Punches Bear in Face to Save Dog”