The first seven years of life for Duke were anything but awesome for him.  Duke had only ever known a sad and lonely life, tethered to the end of a heavy chain and basically forgotten about.  Thankfully, Duke escaped his captors one day and was rescued from the streets.  Today, Duke has a new forever family that promises to love and keep him safe for the rest of his days.

Duke somehow got free from the yard he was tied up in one day, and made a run for the hills.  It was a good thing he got away when he did, as the condition he was found in was nothing short of abysmal.  After gaining his freedom, he made his way to a busy road where a woman driving by noticed the dog weaving in and out of traffic.  She stopped and got Duke to safety.

Surgery was required to save Duke’s life.  The heavy chain he had been forced to wear for presumably the last seven years was embedded in his neck, and he was very underweight and dehydrated.  It wasn’t going to be easy, and it would take some time, but medical staff members were very confident that Duke would make a full recovery. 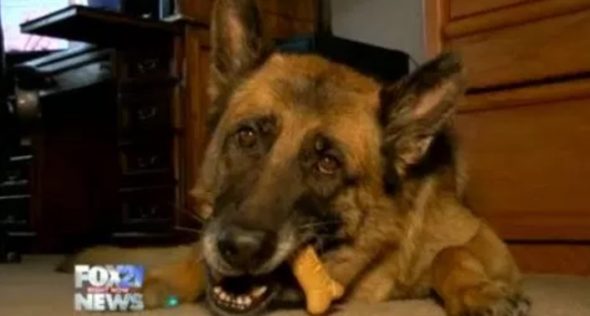 Kyle Schwab, founder of Smash Face Rescue found out about Duke, and he decided to bring Duke in and foster him until a suitable forever home could be found.  He could tell that Duke had been through a lot in his short life, and needed a lot of extra care an attention before he’d be fully ready to be adopted.  Schwab noted that not all abuse is physical.

Duke was in foster care for a short time, but eventually, Rebecca Page caught wind of Duke and his story.  She had been looking to make a new addition to the family, and was considering a rescue dog to fit that bill.  Once she knew about Duke, she knew the choice was clear.  She adopted him, and was just so amazed at how much love, dedication and hard work Duke’s rescuers displayed.

“It’s amazing to see how many wonderful people there are, that are willing to help the dogs that are in need,” said Page.

According to Page, Duke is settling in at his new home just fine.  She absolutely adores Duke, and is forever grateful to her rescuers.  Schwab said that he’s just happy that things ended up working out for Duke.  He’s seen it all too often when help arrives just a little bit too late, and the results are disastrous.  He’s advocated for stiffer penalties for people who take part in abuse and neglect, and believes that Duke’s former humans should still be found and charged for their crimes.

“They need to be ticketed and they need to be jailed, but he had no microchip and he had no tag so we’ll never find these people.  So the best thing we can do for Duke is give him the best life from here forward,” said Schwab.