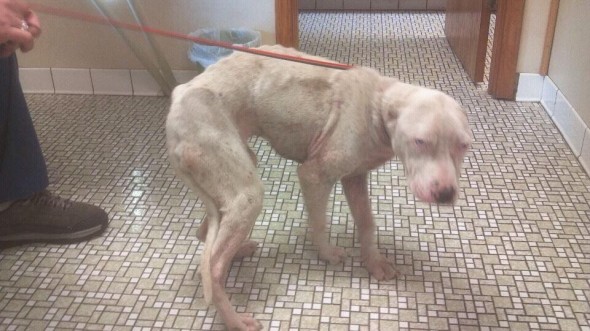 Another dog named Phoenix, this time out of Oklahoma, has garnered attention after the she was rescued by Animal Control from deplorable conditions.  She was found emaciated, teeming with worms, and tethered to a tree.  A local Muskogee veterinarian said he had never seen anything like it.

An animal control officer told the owner, who was given a paltry fine of $250, that he would surrender the two-year-old pit bull or she would be forcibly taken.

“The citations were issued, that’s as far as the animal shelter can do,” said shelter supervisor Vikki Heuman.  “For a municipality, that’s all we can do.”

But Oklahoma residents are not satisfied.  They want to see stricter laws with harsher punishments for animal abusers.  Reheard and friend and fellow volunteer Alicia Edwards have created a Facebook page called “Justice for Phoenix,” which aims for there to be tougher laws that would discourage mistreatment of animals.

“It’s an eye-opener for a lot of them; this goes on everywhere – even in the smallest of towns numerous animals are getting abused and neglected,” Reheard said.

This is especially true for pit bulls and pit bull mixes, whose sad stories of abuse and neglect choke news outlets.  The women are currently raising funds for Phoenix’s medical treatments and their cause by selling key chains with the words “Justice for Phoenix” engraved on them.

Meanwhile, Phoenix is recovering from her days of being tied to a tree, infested with worms and slowly starving to death.

“In the five days since Phoenix came to the shelter, her condition has improved considerably,” Heuman said. “She’s still skin and bones, she moves incredibly slowly and she can barely get off the ground to jump for a treat.  But considering how she looked the day she was brought in, the change in her appearance is dramatic.”

The one thing that hasn’t changed is her fiercely positive spirit.

A dog bed, food and treats have been donated to Phoenix.  The strong dog lets people know when she wants attention by walking over to them, sitting, and putting her head in their laps.

“She has faith in people when I sure wouldn’t have any, that’s for sure,” Reheard noted.

Dog-lovers are already clamoring for the chance to adopt her, but it will be at least two months before she has fully recuperated.

“We want to make sure she goes to the absolute right home — someone who is just going to spoil her rotten,” Heuman said.

Supporters can find additional information on Phoenix at: