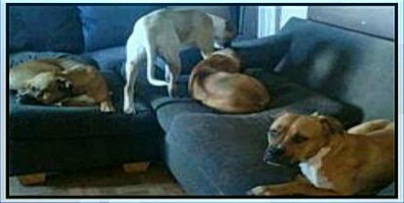 Tim Iocoangeli is fighting to save his family, his four Boxers, from being put to death tomorrow.  He lost them back in April when they attacked a teen girl, and at the very least wants the chance to say goodbye.

“I can’t even say goodbye to them,” Iocoangeli said, his voice cracking.  “I mean, honestly, it’s cruel.  I can’t say goodbye to them?  And they’re never going to be around again.  They’re good dogs.  I mean, that’s my best friend.  All of them are.  They slept with me every night, every night since they were born, and then now they’re gone.”

In April, he left Buddha, Brooklyn, Sheena and Sweetie, along with their puppies, inside his home while he went out.  Two teens opened his front door, and one of them was attacked.  She was bitten dozens of times, and neighbors claim they had to throw bricks to make the dogs stop.  The dogs were impounded, and it was determined that the adult dogs should all be destroyed and the puppies put up for adoption.

Iocoangeli said the teens were clearly trespassing and his dogs were just doing what they were supposed to – protecting their home.  They were likely overly-aggressive because of the puppies, just as any new parent would be.

“I am horrified about this girl that got bit,” he said.  “But the thing is they’re just looking at the bite thing and not around it.  Trespassing.  They were never allowed in that house.”

Prosecutors said otherwise, and the judge ruled against Iocoangeli, saying the victim never entered the house.  The dogs were not said to have been roaming around on the streets, so if the victim did not attempt to go inside, how would the dogs have mauled her?

Iocoangeli, who is facing four felony counts for the dog attacks, at least wants the chance to say goodbye to his cherished family members.  Animal control will not allow this, because they say allowing anyone, even their owner, to see them would expose the county to liability.

“It’s wrong,” Iocoangeli said.  “Eight months, and I couldn’t even go in there.  Liability?  What liability?”

Iocoangeli started a Facebook page and a petition to save his dogs, and pleads with the public to help before it is too late.