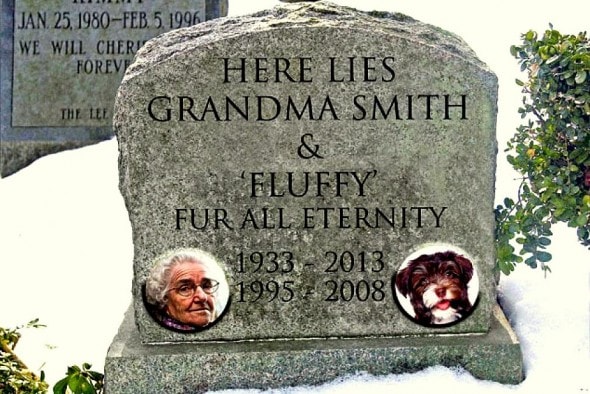 When we die, many of us and our loved ones prefer to include little trinkets in our caskets – photos, jewelry, etc.  Many would also like to have their previously deceased pets included.  A new bill in Massachusetts would make it legal for pets to be buried alongside their owners.

State Representative Nick Collins has sponsored Bill 3272, which was petitioned by Dorchester resident Bill Trabucco.  Some 5,000 cemeteries in the state would be able to designate land for the “co-internment … of the bodies of humans and their pets.”

In some states, similar laws have already been enacted.  In Virginia, pets may be buried alongside their owners, but not in the same coffin.  In Florida, provided that the pet has died first, remains may be entombed with their human.

“Animals have suffered in silence for far too long. They have amazing qualities that the human race can only aspire to,” Trabucco told the Boston Herald. “Going forward, they will rightfully be protected through effective Massachusetts legislation.”

Thomas Daly, chairman of the Massachusetts Cemetery Association’s Legislative and Consumer Affairs Committee, believes there has been an increased demand for pet/owner burials, and feels that all opinions should be regarded before making it a law.  He also wonders whether or not the law would allow people to be buried with their animals in pet cemeteries.

“We’re trying to get our arms around this very, very quickly,” Daly said. “As a pet owner, you want dignity and respect for your pet because they’re part of the family. Are we ready to allow them to be in the same grave together? There needs to be more discussion. Even though it’d be great, we have to look at it in a much bigger picture.”

To see a listing of human cemeteries that allow pet burials, click here.