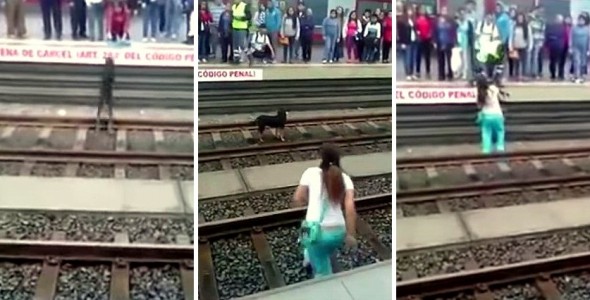 When a dog fell onto the tracks of a busy train system in Lima, Peru, no one seemed to be willing to jump down to get him – not even his owner.  But one woman did, and now she’s facing up to six years in prison!

The dog somehow landed on the Metro de Lima tracks, and tried to jump back up to the platform, but no one could catch and pull him back up.  With a train due any moment, only one woman was courageous enough to do what needed to be done.

She hopped down onto the tracks and trotted over to the dog.  She picked him up and hauled him up to a man that appears to be an employee at the station.

All’s well that ends well, right?  Not exactly.  Metro de Lima administrators say that going on the tracks for any reason whatsoever is illegal and punishable by jail time ranging from six months to six years.  She may also be facing a lawsuit.

Staff recognizes her efforts to save the dog, but still say what she did was illegal.  However, the wording in the law books puts her actions in a gray area.

Article 215 of the Peruvian penal code states that “anyone found guilty of compromising the safety of the train tracks, will be punished with 6 months or up to 6 years in prison.”

But did she actually “compromise the safety of the train tracks?”  Wouldn’t leaving a dog there to die and get dragged under a train be more compromising to the tracks’ safety?  Who knew that inanimate train tracks could be put into such jeopardy, and are afforded more protection than living beings?

People are outraged at the prospect of this hero being arrested, and many have volunteered to help with legal assistance for her should it become necessary.  She has not yet been arrested, but if she is, no one with common sense or a heart would convict her.