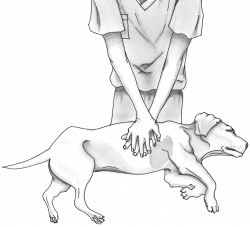 Over the weekend, Science Blog reported new guidelines for pet CPR that every dog owner should be aware of.

For nearly 50 years, the American Heart Association, with the help of researchers and physicians from across the nation, has developed and disseminated guidelines on how best to perform cardiopulmonary resuscitation on patients experiencing cardiac arrest. But no such evidence-based guidelines existed in the veterinary world. Perhaps as a result, while more than 20 percent of human patients who suffer cardiac arrests in the hospital survive to go home to their families, the equivalent figure for dogs and cats is less than 6 percent.

The Journal of Veterinary Emergency and Critical Care has published a series of articles that outline the new guidelines.

Using the new guidelines, the RECOVER team is developing an Internet-based training curriculum to certify clinicians in veterinary CPR. This certification is being peer-reviewed by the American College of Veterinary Emergency and Critical Care, much as the training materials for human CPR are accredited by the American Heart Association. The guidelines will be updated regularly, with the next RECOVER planned for 2017.

Chest compression techniques for medium, large, and giant breed dogs. (A) For most dogs, it is reasonable to do chest compressions over the widest portion of the chest to maximally employ the thoracic pump theory. Either left or right lateral recumbency are acceptable. (B) In keel-chested (ie, deep, narrow chested) dogs like greyhounds, it is reasonable to do chest compressions with the hands directly over the heart to employ the cardiac pump theory, again in either recumbency. (C) For barrel-chested dogs like English Bulldogs, sternal compressions directly over the heart with the patient in dorsal recumbency may be considered to employ the cardiac pump mechanism.

There is strong evidence, including an experimental study in dogs documenting increased rates of ROSC and 24-hour survival, supporting a recommendation for compression rates of 100–120/min in cats and dogs (I-A).[36] However, there is also some evidence that higher compression rates of up to 150/min may be even more advantageous, and further work in this area is needed.

Observational studies in people have shown a high prevalence of leaning during CPR. It is recommended that full chest wall recoil is allowed between compressions.