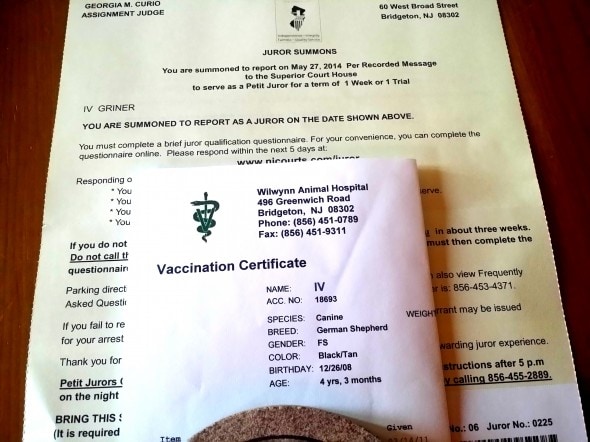 “It’s kinda strange,” said Barrett Griner of what he was thinking when he saw the letter for his dog from the county clerk’s office.  It was addressed to his five-year-old German shepherd, IV.

“I got the mail and I look at it, and I’m like IV Griner, this is my dog’s name,” said Griner. “I’m wondering like, ‘What is this? Something from the county office about her vaccinations or something?’ Like, why is my dog getting mail?”

The notice came addressed from the Cumberland County Clerk’s office and was a juror summons for someone with the first name IV, last name Griner.  This is the name legally given by him, to his dog.

“She’s a female, so I named her ‘IV’ without the ‘Y’ as sort of a play on words. Somebody had to physically type in that name and they didn’t pay any bit of attention to it,” he said.

“This happens many times. As an example, if you had John Henry IV, sometimes the notice might just say Henry IV,” Moffa explained. “I think that the computer probably randomly picks some things that are probably not as on point as they should be.”

Griner says he’s still unaware whether the summons were meant for him or not.  He has received jury notices before, but they’ve always included his full name.

Moffa says all could be cleared up with a simple call to the County Clerks’ officer.

“They call here and they provide us with information from the summons and additional identifying information, and we can determine who the summons is actually for.”

“She [the dog] might be good for a cat burglar case or something like that,” Griner added. “The whole thing was just really, really funny.”