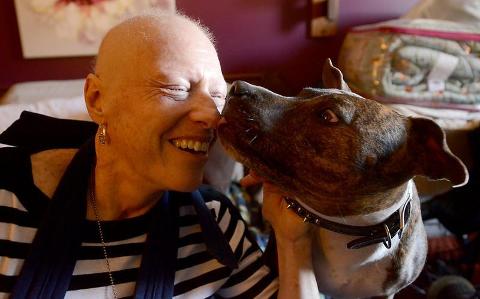 Patricia Cudd has outlived all expectations of her doctors, however, at this point they have advised her that she is in the final stage of breast cancer, and it will take her life.  Now one of her top priorities is to find a loving home for her beloved pit bull mix, Sherlock.  We shared her plea with you a few days ago, but the search for Sherlock’s new home is still on.

“I love him so much. I want him to have the best, you know?” Cudd said from her hospital bed. She had one arm in a sling, and one arm lovingly wrapped across the back of Sherlock.

“Sherie”, as Cudd fondly calls him, is now five years old, and was adopted from the Longmont Humane Society on the 17th of September, 2010.  At first, he was a bit apprehensive toward his new owner.  But didn’t take long for them to become the best of friends.  They often enjoyed walks and playing along the Poudre River when Cudd took breaks from studies at Colorado State University to be an accountant.

About two years later, Cudd would be diagnosed with metastatic breast cancer.

There were many chemotherapy treatments, which took their toll.  Sherlock would be a constant companion, often waiting to curl up in bed with his owner after these treatments in an east Fort Collins hotel room.  The two even shared a Harry Potter movie marathon where, “…[we had been] watching Harry Potter movies for a full day until I felt better,” Cudd recalled, smiling with fond memories. 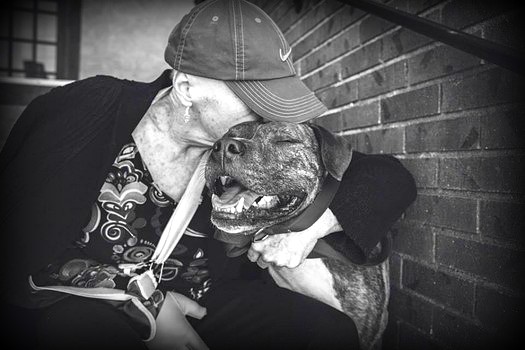 At this late stage in the game Cudd has become worried.  The cancer is really doing a number on her, and there’s a very good chance she will need to go into a hospice care situation.  Her strength is also giving out, adding to the difficulty.  She is sometimes unable to give Sherie care the way she feels he deserves, and this bothers her.

“I am passing away.  I don’t know when exactly.  Of course, everyone is passing away,” Cudd said.  “But the cancer, you know — stage four is the ultimate stage — and he needs a home.”

In five years of living in Fort Collins, she knows all too well the struggle of finding landlords who allow pit bulls and other discriminated breeds.  She now worries that when she goes, it’s going to be hard to provide Sherlock a good home because of the negative perception of pit bulls. Cudd is the first one to admit that Sherlock can be territorial and protective, but she also points out how loving, playful, and attentive he is.

The ideal future forever home for her companion would be one in which Sherlock would be an only pet.  She knows that if given the opportunity, there are many happy, loving memories to be made with him, and if given the chance, would bring lots of love and happiness to any home found for him.

“I have to place him somewhere. It breaks my heart,” Cudd confessed.  “But if he could go to a good home, you know, it would help me so much. It would give me peace.”

Anyone interested in Sherlock, living in the Fort Collins or surrounding area, may call 970-775-0797 or send an email to [email protected].

3 thoughts on “Dying Woman Searches for Home for Her Dog”