Most of us know that when a service dog has his or her vest on, that they are working and need to focus on their job.  However adorable they may be, you really don’t want to distract them by just walking over and petting them.  Most people are fairly cool about it if you ask first, but you may just want to avoid it altogether in Connecticut.  A new law proposed there would make doing so a crime.

At a General Assembly Judiciary Committee meeting, local resident Christine Elkins said, “I wish I could say that people understand, or that they respect us when we ask them not to distract our dogs, but they don’t.”  At the meeting, she talked about a time where a man followed her through the parking lot of a store to her vehicle in an attempt to interact with her service dog.  He even started banging on the window of her car demanding to pet the dog.

So, that’s a pretty extreme case of this, but it’s not as uncommon as one might think.  For Elkins, it really is a matter of safety.  She has mobility issues, and the risk of falling and seriously injuring herself are very real for her.  A fall could land her in a wheelchair, permanently. 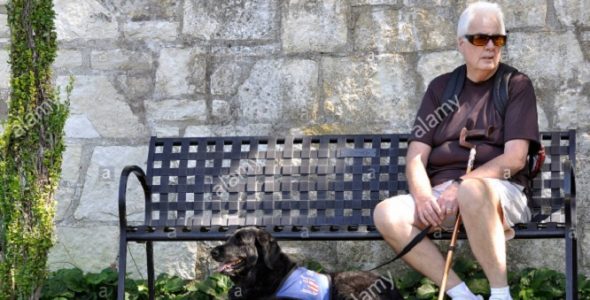 Connecticut is one of the few states that doesn’t have a law on the books for interfering with a service dog in the course of duty.  Like in Georgia, if anyone knowingly and intentionally distracts a service dog from their work, or attempts to harass the dog or their human, they can find themselves spending up to 90 days in jail, and a fine not to exceed $500 or both.

Under the proposed bill, anyone in Connecticut found guilty of this will be facing a Class C misdemeanor.  This would result in the person facing up to three months in prison.

“It is surprising that it is not a crime in Connecticut to harass or otherwise interfere with a guide/assistance dog or the dog’s handler,” wrote the Connecticut Commission on Human Rights and Opportunities, in testimony submitted to the Judiciary Committee.  “Connecticut is behind less progressive states with regard to protecting the rights of guide/assistance dogs and their handlers.”

There were some concerns that someone who innocently just wants to pet a dog might find themselves in some serious trouble that could change their life forever.  The committee then decided to add the wording “intentionally interferes” to the bill, making intent the driving force.  The bill now waits for further action by the state House of Representatives.