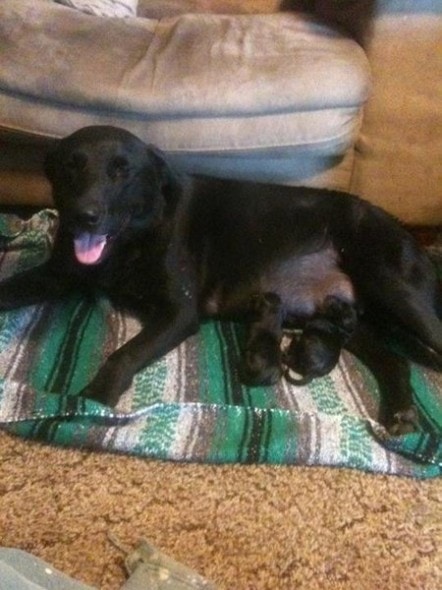 On Saturday, Melony Patton’s brother made a grisly discovery: his sister’s beloved black Labrador, Jetta, had been dragged to death. A trail of fur and blood on the asphalt led him to her lifeless body. Jetta’s devastated family cannot understand what would motivate someone to harm Jetta, ‘who would never hurt a fly’ according to Patton.

Jetta was a new mother who had given birth only a month ago. The Patton’s have been bottle feeding the nine puppies since Jetta was killed. The Pattons have had Jetta since she was only 8 wks old. She was two years old at the time of her death. Her legs were bound with baling wire and she was dragged behind a vehicle and shot. It is unknown whether she was shot before or after she was dragged.

Sheriff Scott Walton is determined to find the person responsible for this crime and bring them to justice. “There is nothing really to justify killing a dog. I think there is a special place in hell for anyone who abuses an animal like that. You’re going to be in deep trouble, and I’m pressing charges to the max,” Patton said of those responsible. Oklahoma has tough animal cruelty statutes that can put the perpetrator behind bars for up to five years and levy large fines.

The Wild Heart Ranch (https://www.facebook.com/WildHeartRanch), a wildlife rescue and rehabilitation organization in Rogers County, together with Humane Society of the United States and the Oklahoma Alliance for Animals has raised over $4500.00 as a reward for information leading to the arrest of the perpetrator. A message on the Wild Heart Ranch Facebook page has assured their supporters that the Sheriff’s office takes this crime very seriously and will find the person or persons who committed this crime.

“Jetta was very special,” said Melony.  “If the kids were outside, she would stay right next to them, and right after she had her puppies last month, my two-year-old would roll over her and play with her and she would lick him and love him.  She was like a kid to us, she would lay on your lap, and jump on you for a hug.” Patton is having a hard time explaining Jetta’s death to her children, “I told them she’s in heaven”.

Anyone with information about the crime is asked to call the Rogers County Sheriff’s Office at 918-341-3620.