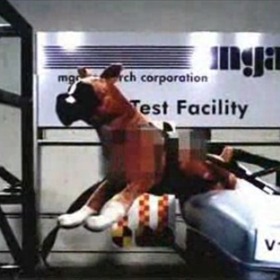 As New Jersey considers making it the law to have your dog restrained in your car, a new study suggests that these dog seatbelts and harnesses may not offer much actual protection and can actually cause injury to your dog.

Lindsey Wolko founded the Center for Pet Safety in 2011 after she was in a car accident with her dog Maggie. At the time Maggie was restrained with a harness, but she suffered spinal injuries as a result of the accident. This is what inspired Wolko to test dog harnesses and restraints. “My dog was injured by one of these products and I felt that this was inexcusable, this should not happen.”

Wolko tested four of the strongest dog harnesses on the market using the same federal motor vehicle safety standards used to test child car seats. A 55 pound weighted test dog was used in a simulated 30-mile-per hour collision. Every single one of the harnesses failed.

The first harness provided too much slack allowing the dummy dog to fly forward and crash into the test bench. In the next two tests the harness snapped, sending the test dog flying through the air completely unrestrained. In the fourth test the worst result was found, as the harness slid up the test dog’s neck upon impact. “I don’t think that there’s any doubt that those dogs would have been seriously injured, if not fatally injured,” Wolko said.

The American Pets Products Association issued the following statement in response to Wolko’s test results, “There are an increasing number of reported accidents where a pet distracting the driver is being cited as the cause. A pet restraint that merely limits a pets access and distraction to the driver and limits its motion in the event of an accident is still an improvement over no restraint.”

Wolko doesn’t blame the manufacturers though. Since there are no existing safety standards in place, they didn’t do anything wrong. Wolko sees the lack of safety standards as the issue and is focusing on having that changed, “The pets that we love, they need real protection.”