For Horus, who was rescued at 6 weeks old after being mistreated by drug addict owners, life presented many challenges.  The deaf dog was adopted at 10 weeks but returned in under a year because of his poor behaviour.  For the next 18 months, Horus waited in his kennel for someone to give him a chance.  That someone turned out to be Rosie Gibbs, a sign language enthusiast.

Ms. Gibbs used Makaton, a basic form of sign language often used with young children, to communicate with Horus.  It turns out that Horus, who others thought was too dumb to be trained, is pretty intelligent after all.  Said Gibbs, “Nobody would take him because of his behaviour. He used to get aggressive around dogs and people, but once we got past that and began to communicate he turned out to be a brilliant pet.” 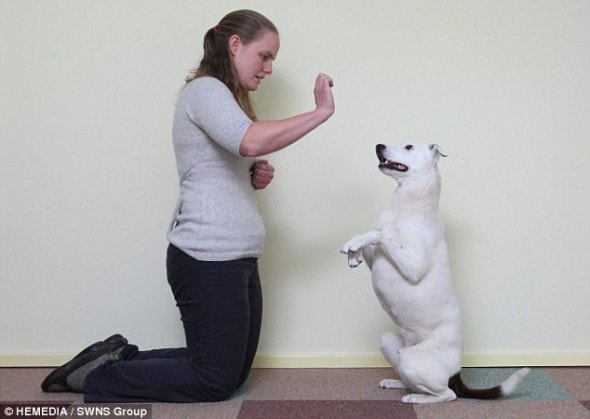 After being with Gibbs, an osteopath from Lockerbie, Scotland for 3 years, Horus now knows over 50 commands including ‘sit’, ‘stay’, ‘pay attention’, ‘play’ and he can even open drawers on command.  He has also earned his bronze, silver and gold Kennel Club Good Citizen awards.

Ms Gibbs, a first time dog owner, said “People think deaf dogs are different and stupid and can’t be trained, but Horus is proof that they can. I used food at first and every few seconds I would feed it to him so he got into the habit of checking to see if I had any. Once he had mastered that it was easy.”

Ms Gibbs, helps run the Deaf Dog Network, an online support group for owners of deaf dogs, has become an amazing advocate for deaf dogs, educating people and encouraging them to take on deaf dogs as pets.  “Deaf dogs make great pets. Horus can’t hear but his other senses are stronger to compensate.”

Gibbs was willing to give Horus a chance and be patient and he has proven to be worth the effort and a wonderful reminder that with love and proper attention and care, even a dog that at first appears very troublesome can turn into a well behaved angel, and a poster child for deaf dogs everywhere.