Newborn Puppies Discovered in Shallow Grave After Being Buried Alive 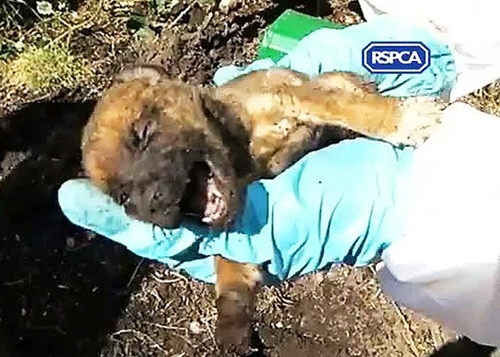 The RSPCA, police, and an independent vet visited the home of married couple James and Lorraine Perks at French Avenue, Mile Oak, Tamworth, and were not prepared for the horrors they faced.

Nine dogs and 15 puppies were removed from the disgusting conditions, with most being confined in wooden rabbit hutches, lying in their own feces and urine. One hutch housed four adult terrier dogs, another a Staffordshire bull terrier and her four pups with a further two hutches both containing one adult dog each.

Investigators were shocked when they discovered two sick puppies who had been buried alive in the back garden. The newborn pups were desperately fighting for life, but tragically could not be saved due to severe dehydration and diarrhea. Vet Steve Odell, who put the puppies to sleep later, described the scene as “one of the most horrific ever witnessed.”

Other dogs which were found inside the property also lived in squalor with pools of feces and diarrhea on the floor. The smell at the property was overwhelming.

The RSPCA was alerted to the address by a routine call from a member of the public who bought a puppy from the Perks after seeing a card on a noticeboard. They took pity on the pup paying £50 cash for it. The puppy became very unwell, dying days later while under veterinary care.

At a previous hearing, James Arthur Perks (74), Lorraine Donna Perks (49) and their lodger Stephen Matthew Jenkins (35) entered a guilty plea via their defense solicitor after failing to attend court.

Today, when passing sentence at Burton Magistrates court the chairman of the bench said: “This is the maximum sentence we could impose with a reduced custodial sentence from 26 weeks for the guilty plea. If we could have sent you to prison for longer we would have. You were all equally to blame as you were all residing at the same address.”

They were sentenced to 25 weeks in jail and banned for life from keeping any animals and their dogs were confiscated by the court.

“No matter how many years I work for the RSPCA this day will remain one which I will never forget,” said inspector Jayne Bashford. “All who attended on the day were shocked to the core.

The whole property was in a disgusting state with pools of dog feces on the floor of the living room and numerous young puppies living amongst the squalor. Two adult bitches in the living room had clearly been bred several times.

The dogs outside, confined in rabbit hutches, had no bedding and barked uncontrollably as if pleading for help. As the dogs were being checked over, a police officer was told that a puppy had died that morning and it was then that the abhorrent discovery was made of two tiny puppies gasping for breath beneath a patch of disturbed soil.

This case highlights all the concerns we have with respect to irresponsible and indiscriminate breeding of dogs and the selling of those animals to unsuspecting members of the public.

The defendants admitted breeding and selling dogs. Each puppy to them was of value purely for the price they could get for it. Sadly this is too often the case with people who breed and sell dogs for profit where the welfare of the dogs is not the top priority. To put it simply they were profiting in death and suffering.

I hope this case will make people think before they respond to an advert in a newspaper, a card in a newsagents or an internet site advertising puppies as your actions could contribute to fund similar irresponsible dog breeders.”

Inspector Bashford also added her thanks to the caller who contacted the RSPCA after their puppy becoming unwell and every caller who calls the society as without them we cannot act.