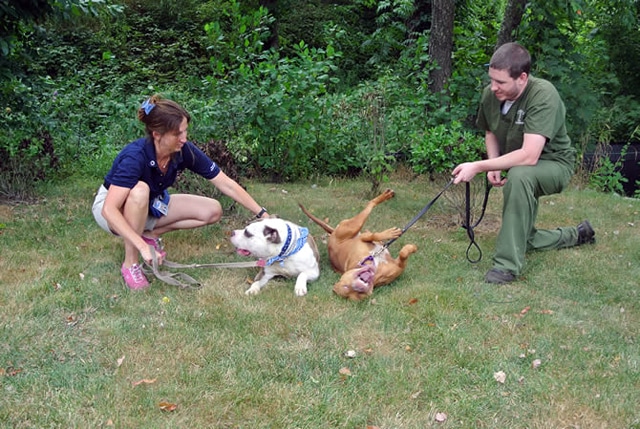 Sadie and Blue celebrated their freedom yesterday with a romp in the grass. The lucky dogs may not know it, but three weeks ago they narrowly escaped death after a Massachusetts shelter labeled them too vicious for adoption. Public outcry put that death order on hold, but in actuality, it was one woman’s dedication that eventually saved them.

Just days after their rescue from an abusive situation earlier this month, officials said a behavior evaluation suggested that the dogs would harm anyone who adopted them. Concerned dog lovers were up in arms over the hasty decision, and their messages of protest eventually reached Jeni Mather, who is now caring for and rehabilitating the dogs the Blue Dog Shelter in Brockton.

Mather says the dogs just needed a chance. She and her staff spent the past two weeks visiting them at the Brockton Animal Control shelter three times each day. They were terrified from their ordeal, and would flatten themselves and bark whenever someone approached their cages.

Mather and her employees knew that love and patience would be required to help the frightened animals understand that they were safe, so they formed a plan to gradually bring the dogs around, and it worked wonders. During their visits, they offered treats to the dogs through their cages, being careful not to encroach on their space or make them feel threatened in any way.

After a slow start, the dogs caught on. Mather said taking Blue out of his cage was heartbreaking at first.

“When we would take a step forward, he would hit the deck,” Mather said in an interview with Enterprise News. “He would just absolutely thrust himself on the ground and close his eyes.”

But after a week of visits with treats and cheeseburgers, Mather was finally able to earn Blue’s trust. Once he was comfortable on a leash, she pulled him from the shelter. Sadie, transformed by a week of visits from a steady stream of treat-wielding volunteers, joined them.

Mather said this is a classic example of what a little love and care can do for an animal who has never known human kindness. She believes it could take as long as 10 months to rehabilitate the dogs, but she’s committed to making them whole and finding them forever homes.

“It’s been hours and hours and days and days of work,” Mather said. “They have come a long way, they really have.”