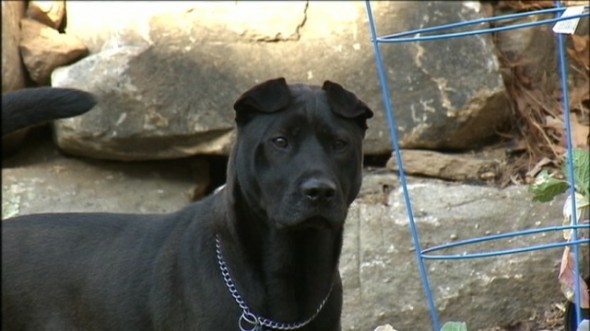 Only four days after the Newman family brought Bear home he became the family hero. Bear’s barking in the middle of the night alerted the family to a huge brush fire right outside their home.

The Newman family already had three dogs, but couldn’t help adding Bear to their family. Bear had been looking for a home for a while. The rescue group Angels Among Us saved bear from being euthanized by a county shelter. He spent a year with Angels Among Us until the Newman family came along. The Newman’s chose Bear because he reminded them of their oldest dog Charlie. Little did they know how thankful they’d be for choosing Bear.

Bear had only been part of the Newman family for four days when he started barking at 2:30 a.m. and wouldn’t stop. So Mr. Newman got up to see what Bear was barking about. When he looked out the window where Bear was barking he saw a huge brush fire burning in the woods. Without Bear the family would’ve slept as the fire reached their home, putting their lives in jeopardy.

Bear’s warning made it possible for firefighters to get to the blaze in time and not only save the family, but their home as well. The fire only reached the family’s fence. “Thank goodness for Bear,” said Sarah Newman. “Just as much as you have to look out for them, they look out for you.”