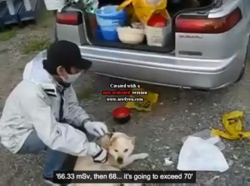 April 22, the government has implemented a “no-go” law punishable by fines or imprisonment [1].

This policy has reportedly blocked access by private Animal Search and Rescue teams — many of which have documented wide-spread starvation of the companion animals, pets, and livestock within the TEPCO exclusion zone.

Concerned citizens held a protest in Tokyo on May 8th, starting in the “Hachiko” Square and ending at TEPCO offices [2].

On May 5th, PETA has issued an action alert which in part states [4]:
“Please urge the Japanese government to take immediate action to transfer farmed animals inside the 20-kilometer no-go zone to facilities where they can be cared for or to euthanize any animals who are suffering.”

PETA also provides a form email for readers to send:
“I was shocked to learn that the Japanese government has yet to take action to end the suffering of the estimated hundreds of thousands of farmed animals in the no-go zone around the Fukushima power plant.”

@0:00: The video opens in a parking lot with a skittish dog looking cautiously at the rescuers.

A geiger counter sounds a warning, not just of detected radiation particles, but a warning that the animal rescue team is being over exposed to radiation.

The skittish dog approaches food scattered on the ground and begins eating.

Behind the car, a team member can be seen kneeling down to calm yet another dog on a leash.

Speaking of the leashed dog: “We’ll take you with us and hope we’ll find the owner.”

The team takes note of the dog and GPS location in order to find the owner.

Referring back to the skittish dog: “Ok then…See you next time then. You have to stay alive, ok?”

@3:49: The team stops on a street in the middle of town. Piles of dog food can be seen in the street. Barking dogs can be heard inside the empty apartments along the street.

“There are so many dogs barking.” Urging his team to stay calm in the face of twenty or more dogs stranded in houses and potentially starving, the man says: “Everyone, stay strong… We’ll come back again.”

@5:54: The team is back in the car driving through town. Dogs are wandering past on the street. “Let’s throw out lots of food. Everyone [the dogs] are waiting look. Stay strong…You too…Poor dogs…”

Other passenger: “Throw the food out..More and more…”

Woman: “Give a lot of food, we won’t be able to feed them for a while…We don’t know when we can come back again in this situation…Just give everything out.”

The camera pans to the back seat, past the driver who is wearing a white radiation protective suit and googles. There are three dogs sitting in the back seat. “Hey you guys…We are taking you guys with us, ok?”

The scrolling title indicates this video was taken on April 22, 2011.

In yet a third video entitled “SOS Fukushima animals,” a Fukushima prefecture citizen has released a desperate plea of help, worried the animals may be starving and pleading for the government to provide rescue and shelter.

[The citizen bows to the camera. Reading from prepared notes, the citizen begins:]

Hello to everyone all over Japan. I am Meiko Yoshida, living in Odaku-ku, Minami Soma-shi, Fukushima-ken. My residence is at 17 km of the power plant.

March 11, 2011, the area was hit by the Eastern Japan mega earthquake as well as the tidal wave, followed by a series of accidents at TEPCO. The entire area of Odaka-ku, where we live, is within the 20 km radius. On March 12, the next day of the earthquake, TEPCO issued a voluntary evacuation order to Odaku-ku, which I was not aware of at the time.

The following day, on Sunday, March 13, I went to Odaka Ward Office, where I was told to evacuate immediately. The faces of the personnels then at the office were all devoid of expression like zombies while they worked. They knew what really happened in the power plant, that something horrible [had] happened, that is why their faces became like zombies.

Even though I was told to evacuate immediately, since I had nine cats to take care of at home, I had not been able to evacuate immediately. Several days later, on March 19, the Self-Defense Force members and the Ward Office personnels visited my home to persuade me to evacuate. I was told to leave the pets behind, and I left without them. At the time, I made a mistake of releasing my inside-living cats outdoors. I didn’t have a mobile phone. I regret not having been able to consult with others who were in the same situation as myself.

Even at the evacuation center though, I was worried about my cats at home, so from March 19 until the midnight of April 21, I went back home every other day or two days to feed them food and water. During that period, six out of nine cats I released [had] been found and I have asked animal protection groups to look after them. One of the nine [has] died of a disease, and still now there are two remaining whom I have not been able to protect yet.

In the a.m. of April 21 – it was just so sudden – I heard that the 20 km area would become a severe cautionary zone. Before when I asked around when the off-limit will take effect, no one ever told me, but a bad news like that happened suddenly. Out of excessive worry, at around 23:00 on April 21, I went home but I was unable to provide them for protection. The cautionary zone became effective starting April 22, so I could no longer go back to my house. I had been asking the police officers at the checkpoint how I can get inside, [and they] told me that I need to obtain a permit from the city mayor, so I also went and appealed directly to the city mayor. So I went back and forth between the city’s municipal office and the public health department, and asked to be permitted inside the zone, but it just could not be done.

The other day, on April 28, the public health department went inside the 20 km zone for the purpose of doing research; however this was for inspection only, so they could pick up wandering animals from the road. But no helping hand was extended for the cats and dogs who were left inside homes. When you rescue animals, time allowance is needed to carry out the task, but being told “it starts tomorrow” so suddenly, I was not able to carry out rescue.

At evacuation centers, there are MANY people who were told the same way and could not even prepare for evacuation, nor could they take their pets with them to evacuate. Those people are so worried about their pets living without them, their heartache is so severe that they can’t sleep for nights; they can’t even eat [and] many of them are emaciated. Please help those of us who are worried about our animals and our pets.

Twelve many days have already passed since the off-limit zone order took effect on April 22. Pets also have lives, so I worry at the possibility of them not being protected in time. Please help to remove the disaster victims’ worries and heartache. I felt nothing would become of just being quiet, so I made a picket sign by myself and stood in front of the municipal office and collected this from those in similar circumstances.

[Holding up papers:] I started this on April 30 and it’s been three days since. I collected accounts from fourteen people suffering similar problems, right here with information of their pets they had to leave behind. [Holding up copies of the news papers:] This activity has been featured in the local newspapers, here is Mainichi newspaper and Fukushima Min-Yuu.

There are people who are in trouble deep as you [can] see, because they had to leave their pets behind. Their faces look different now even. What I’d like to ask of you to help us, is to make it possible for us pet guardians to be able to visit our pets periodically,
accompanied by the SDF [Self-Defense Force] or policemen, so that we can go to provide them food and water.

Concurrently with that process, I’d like the government [to] do two things: Rescue the animals and keep the rescued animals under protection [shelter].

Those who believe that animals’ lives are also precious, please, we are the cohabitants of the planet earth that we share. Please help us. And please support the animal protection groups who have been hard at work.

Hasn’t Japan been progressing towards the country which is respectable? Just standing by and watching animals die when we have the chance to save them, how could this country become a nation that the world looks [upon] with respect?

It is hoped that Japan embraces the little lives of our animals too and aspire to become a country that is truly respected. Everybody in Japan, please help us. Please. That is all. Yes.

The Hachiko Coalition is repeating our previous request and calling for the organized, and immediate evacuation of all uncontaminated domestic animals and livestock inside the exclusion zone.

While this triple disaster (earthquake, tsunami, radiation) may be unprecedented that does not mean it is unmanageable. Japan has vast resources and technical know-how, it simply needs to exercise the resolve and solve this problem and demand emergency evacuation funding from TEPCO disaster insurance pools.

The Hachiko Coalition believes the current “starve them out” plan to deal with these animals is unacceptable and reprehensible to the many people witnessing the events as they unfold.

Persons wishing to sign a petition requesting rescue of these animals should see:
http://translate.googleusercontent.com/translate_c?hl=en&sl=auto&tl=en&u=http://freepets.jp/&rurl=translate.google.com&twu=1&usg=ALkJrhhnB_xS-B4_9YS6j1_GF1opRmw5Mg

To voice your concerns to the Prime Minister of Japan and His Cabinet, please use this form:
http://www.kantei.go.jp/foreign/forms/comment_ssl.html