The paws belong to Wookie, and he and Vanessa brought him home 10 years ago, before they even were married.

The Lacheys told TODAY that Wookie was something of a “trial run” before they had children. Now plenty busy with their kids — Camden, 4; Brooklyn, 2 and Phoenix, 10 months — they’re more than ready to call that experiment a success. In fact, Vanessa took to Twitter to proudly announce the moment Camden spoke his first word: dog.

Lachey, 43, is big on family and in a recent TODAY interview, he made it clear that Wookie is definitely an important member of the tribe. 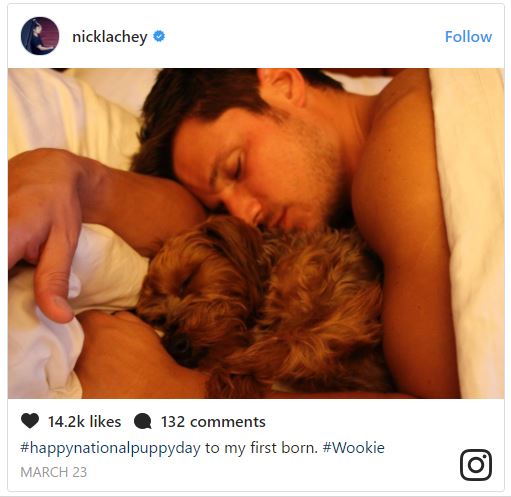 “It’s so funny,” he said, “when you talk to people who have kids and don’t have dogs, they refuse to see the connection between having a dog and using that as a little bit of a training ground, but we totally, totally buy into that.

“It’s obviously different having a child and having a dog. But in a lot of ways, some of the principles apply, with patience and things like that. Wookie was definitely a good training ground — a good trial for real parenthood.”

Wookie turned 10 last month and Lachey says that in many ways, the scruffy pup is still their first child.

His kids feel the same way.

“They love Wookie. Wookie likes to cuddle up next to you on the couch and snuggle up. He’s definitely a lap dog. And if Wookie’s not around, Camden’s the first to say, ‘Where’s Wookie?'”

In fact, when the Lacheys were asked to be a part of People magazine’s “Most Beautiful” issue, Camden was the one who made sure Wookie was part of the photo shoot.

“He wanted Wookie to be a part of the family picture. So if you see the spread in People, there’s Wookie on the couch with the family.”

Lachey says that Wookie has led quite the privileged life.

“He’s the dog in a designer bag in first class under the seat, and he’s been that way since he was a puppy.”

Lachey admits he sings to his dog, as well.

“I sing to everyone and everything. I’m a singer. So, yes. Wookie’s been serenaded a few times…. Anyone who wants to sing for their pets or make up songs for their pets, I am fully endorsing that.”