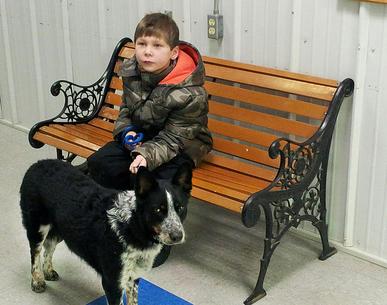 For two weeks a dog eluded animal control and rescue workers who were unable to capture the stray and bring her in from the cold. This past weekend a 9-year-old boy made friends with the dog, who he named Kelly, and was able to win her trust and bring her out of the cold.

D.J. Levan went sledding with his father and a friend at Krape Park in Freeport, Illinois. While enjoying the fresh snow on the hill D.J noticed a dog, a blue heeler mix, standing nearby apparently afraid to get close to anyone. He attempted to pet the dog but the dog wouldn’t let him get close.

When D.J. went home Saturday he couldn’t stop thinking about the dog. So on Sunday he returned to the park again to go sledding and hopefully find the dog. As D.J. began sledding, the dog started to follow him up and down the hill. The two soon were playing and the dog even began to lick D.J.’s face.

As D.J and the dog became friends, the Levan family learned that animal control and the Friends Forever Humane Society had been trying to capture the dog for two weeks. D.J. decided to name his new friend Kelly and at the end of the day Kelly hopped into the Levan’s car with her new friend. “I heard a lot of people talking about how this dog had been living at a park, but no one could get close to her,” D.J. said. “She became my friend – I gave her a name – I just knew we had to save her.”

With Kelly safely in the Levan’s car, D.J.’s dad contacted the shelter manager at Friends Forever Humane Society, Carol Falconer. For two weeks Falconer and Animal Control Officer Bill Niesman had been trying to capture Kelly, but she’d never let anyone get close enough. “We had people calling us all the time about this dog, but we just could not get her,” Falconer said. “The fact that D.J. and this dog bonded just shows the power of trust – Kelly, as she is known now, trusted that little boy – he saved her.”

Kelly doesn’t have a microchip and will be kept on hold for seven days before she can be adopted. She is believed to be around 2-years-old. Although a little worn from the cold, she’s healthy. “I am so glad she is now safe and warm,” D.J. said. “I can’t wait to visit her someday.”